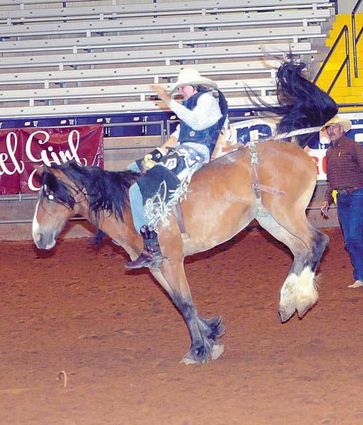 It's almost as if it's tattooed on the foreheads of the four riders Friday night at the Curry County Events Center, site of the state finals. Or maybe it's just a different mindset that manifests itself externally.

"There's definitely got to be something messed up in your head to ride those crazy (expletive)s," said Logan High graduate Levi Molesworth.

Kurt Pablo, a Farmington High graduate, is in his first year doing the event. He wasn't all that interested from watching the event on the high school level, but a television showing changed his mind.

"It was the national finals," Pablo said. "Those guys were really good. I wanted to be like them."

So he joined up for the event, which features a rider getting on a horse with no saddle or rein. With one hand, the rider grabs a rigging on the horse, who's not all that happy about having a rider.

The rider stays on for eight seconds without falling or using their other hand, they score anywhere from 0 to 100 points, depending on the quality of the ride (up to 50) and the difficulty of the horse (up to 50).

"I wanted to be an all-around cowboy," said Harper, a sixth-generation cowboy who gets mockingly called "Hairback" for his wavy hair that sticks out from under his hat.

When asked what he likes about the event, Pablo simply said, "It's wild."

Henry had a different take.

"Who said," Henry joked, "we have to like it? It's just something for us to do."