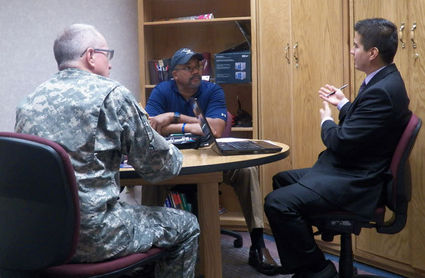 Joshua Baca, an adviser for the Veterans Business Outreach Center of Albuquerque, sat at a table with First Sgt. Robert Scales of the New Mexico Army National Guard and businessman Donald Sawyer.

The three men "talked shop" about what connections are important to business.

"I've already got all of that in place as far as a business plan but as far as the veteran side, I don't know all the benefits that come with that," Sawyer said Tuesday morning after the Clovis Chamber of Commerce quarterly breakfast.

Sawyer, began a family and marriage mediation business in the area after retiring from 20 years in the U.S. Air Force.

The theme of the chamber's breakfast was Honoring Our Heroes and the guest speaker was Joe Long, director of the Albuquerque VBOC, which is one of 15 offices around the nation.

"Our vision is that every region will be made aware of the resources available to those who desire to create or expand veteran-owned businesses," Long told his audience Tuesday morning at Wells Fargo bank in Clovis.

Long spent the morning using baseball metaphors to explain how VBOC works with veteran business owners or pre-business owners to help them create or expand their business.

Long said those starting new businesses have to hit every "base" to get a home run, saying that step one is for veterans to visit their local VBOC to help them determine whether their business idea is feasible, and if so, VBOC helps prepare them to be a business person and learn the advantages they have as veteran businessmen.

Long said step two would be to develop a business plan, determining things such as your business' name and how to market your product or services. Step three was to put the business plan into action.

"You ever hear that expression business is not built on hope?" Long asked his audience, telling them business owners cannot build their businesses on the idea "seems like" (an idea is plausible).

Long said Goslin was called out, despite beating the baseball to home base.

"The umpire picked up the microphone and said, 'the player is out because he missed first base,'" Long finished the story. "So don't miss first base. Have a plan."

After the chamber breakfast, Baca counseled local veterans on business ideas in a private room.

"I definitely got good input," Sawyer said after meeting with Baca. "The good thing about Josh is in my business, they give you business connections and network us with different folks. He's going to stay in touch with me until I achieve the connections I need."

In conjunction with the veteran business counseling was the Hiring Our Heroes event at the American Legion Post 25 in Clovis, which included 25 local business booths with at least five available jobs, according to Ernie Lombardi, U.S. Chamber of Commerce representative.

"It's not the right thing to do. It's the smart thing to do," Lombardi said of businesses hiring veterans. "They're highly skilled and trained in many areas. They have a true sense of teamwork and the skill sets they bring to the table are easily transferable."

"This was good timing," he said of the event. "I plan on sticking around here for a few years and I'm just trying to keep my options open."

Long said he hopes to hold another veteran business forum in Portales in the fall.