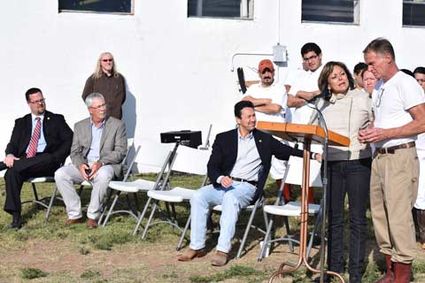 The expansion is expected to create up to 20 new jobs.

“At the state level we are continue to work to keep businesses in the state, while bringing businesses back and enticing new businesses to come to our state,” Martinez said.

“What gives me the warmth in my heart,” she said, “is to come to small communities and see the growth of businesses and how much it means to residents.”

Martinez said since everyone expects job growth to happen in urban areas like Albuquerque, Rio Rancho and Santa Fe, it is exciting announce good job news in a small community like Tucumcari.

Martinez applauded Charles Krause, owner of the cheese factory, for his determination to expand the factory and bring more jobs to Tucumcari. She said Krause could have chosen to open his business in Texas, but chose to build his factory in New Mexico.

Martinez said value-added food production, such as cheese-making, has a long and cherished history in New Mexico, especially in eastern New Mexico, and is a targeted industry for growth.

Food products that add value to the original ingredients, she said, can be exported outside the state to bring new dollars to communities like Tucumcari.

Martinez said manufacturing jobs are important to economic growth because they are typically higher paid positions. The jobs being created in Tucumcari, she said, all meet the state’s high wage threshold and help to build the local tax base.

Martinez said, however, she would continue to fight for New Mexicos’ national labs and miltary bases. When federal jobs get reduced, however, she said New Mexico will have already built up private sector.

Martinez said the state has added 32,000 private-sector jobs since she took office.

Krause said the expansion is a 40-year commitment.

“My goal is that we are here and making Feta cheese 40 years from now,” Krause said.

Ruth Ann Litchfield, Tucumcari’s mayor pro-tem, said, “We are so excited that Governor Martinez has come to Tucumcari to celebrate the expansion of the cheese factory, a company that has been a blessing for Tucumcari.”

The funds have been collected from a city gross receipts tax that funds LEDA. Expenditures of LEDA funds, however, must be approved by the state economic development department.

During construction, the cheese factory will pay $262,080 in wages, and in operation, the expanded plant will provide payroll additions between $218,400 and $262,080 per year, according to the grant application.

Richard Primrose, Quay County manager and president of the economic development corporation said, “This business is like our Intel, and we truly appreciate the Governor for coming out to Eastern New Mexico and being a part of this because this is huge for Quay County and Tucumcari.”

Jon Barela, state secretary for Economic Development, said the last time he was in Tucumcari, he saw the good things that Tucumcari MainStreet was doing with a goal of draw people from Interstate 40 and into the city.

Barela said people like Krause, who have invested their life's savings and taken risks to create opportunities, are the ones who make New Mexico run. He said the governor shares that philosophy and that’s why he is proud to be a part of her administration.