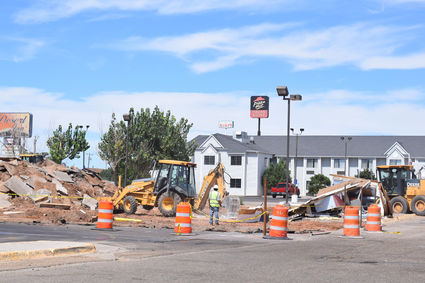 Work crews clear the concrete from the parking lot and debris of the Greyhound Bus station north of the McDonald’s restaurant on the 2300 block of South First Street in Tucumcari. The site being cleared will be where the new McDonald’s building is to be constructed.

the McDonald’s restaurant on the 2300 block of South First Street in Tucumcari. The site being

cleared will be where the new McDonald’s building is to be constructed.

Construction at the Tucumcari Mountain Cheese Factory and new construction near McDonald’s are signs of growth that show great things are in the works for Tucumcari, said Pat Vanderpool, executive director of Tucumcari’s Economic Development Corporation.

Vanderpool said the construction going on at the two sites are examples of exciting things to come. He said the EDC has had more inquires on the retail front in the past three months than it has seen in the past seven years.

Vanderpool said the increased interest is due largely in part to the success of funding four Local Economic Development Act projects last year in Tucumcari. He said this includes the $70,000 for Buena Vista Labs, LLP, to help expand its eyeglass lens-processing operation and expand its retail business, as well as $141,830 for assisting the cheese factory in financing water quality-enhancing facilities for its expansion.

There was also $50,000 in LEDA funds approved to help Adam Nichols establish Rugged, Inc., which will manufacture a multi-function flashlights for emergency first responders and some outdoor enthusiasts and $10,000 in LEDA funding to help Dale Harapt, a Las Vegas naturopathic doctor, bring his medical practice to Tucumcari.

Vanderpool said the LEDA funding projects have sparked interest in small businesses to look into funding for the expansion or establishment of a business in Tucumcari. He said even if the EDC cannot assist the businesses obtain LEDA funds, it will work to find different sources of funding to assist in their growth.

The expansion was celebrated in an event in October, attended by Gov. Susana Martinez and Jon Barela, state economic development secretary.

Martinez applauded cheese factory owner Charles Krause for his determination to expand the factory and bring more jobs to Tucumcari.

Krause said the expansion is a 40-year commitment.

“My goal is that we are here and making feta cheese 40 years from now,” Krause said.

Vanderpool said the cheese factory expansion is expected to result in 10 to 12 permanent jobs paying an average of $10.50 per hour.

During construction, the cheese factory will pay $262,080 in wages. Once in operation, the expanded plant will provide payroll additions between $218,400 and $262,080 per year, according to the grant application.

Quay County Manager Richard Primrose, who also serves as EDC president said that in 2002 the factory provided seven to eight jobs but has increased the number of jobs through the years. He said with the expansion, the factory will employee 40 to 50 workers.

The construction near the McDonald’s on the 2300 block of South First Street is thought to be the site of a new building for the restaurant.

The franchise owner could not be contacted for comment.