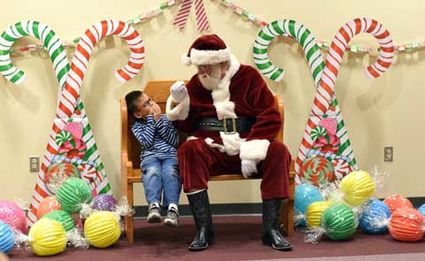 Area organizations held their annual lighting events over the weekend to help the community get into the Christmas spirit.

On Thursday, 155 parents and children gathered at Mesalands Community College for the annual lighting of the courtyard, the reading of “The Christmas Story” and meeting with Santa Claus.

“Mesalands is very happy to have this annual event for the campus and the community, to harken in the holidays and to celebrate the rest of the season,” said Aaron Kennedy, vice president of student affairs.

Santa Claus (Oran Watson) met with the children to hear their Christmas wishes.

Nine-year-old Taylor Enriquez, of Tucumcari, asked Santa Claus for a skate board for his puppy, Scout, to ride.

The children received a gift bag from Mesalands and were treated to cookies and hot chocolate.

The children were then treated with the reading of “The Christmas Story” by Kevin Mueller.

This is the fourth year that Mueller has read the classic Christmas tale for the children at the event.

Mueller said several years ago he used to dress up as Santa Claus for the children during Christmas. He said Mesalands already had a Santa for the event so he offered to read the story to the children.

“This is my way of kicking off the season,” Mueller said. “I enjoy reading the story and watching the children’s reaction.”

On Saturday, the Tucumcari/Quay County Chamber of Commerce held its annual Parade of Lights.

This year there were 13 entries in the Parade of Lights, said Gail Sanders, chamber director.

Sanders said the parade route was changed to travel a straight line along Route 66, from Kmart to the Tucumcari Convention Center. She said in the past, the parade route had several turns that were difficult for the floats to navigate.

“The new route was a huge success,” Sanders said. “The community lined up along Route 66 to help us celebrate the event.”

Sanders said the new route also made it easier for the residents to meet at the Tucumcari Convention Center where Santa Claus was set to meet with the children.

“Its wonderful to see the children get so excited to see Santa,” Watson said.