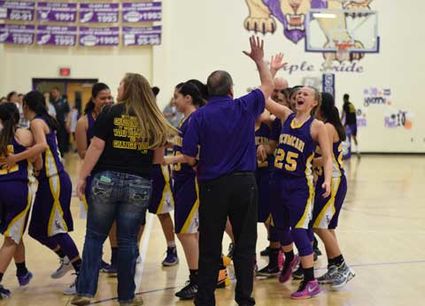 The Tucumcari Rattlers and Lady Rattlers will host the District 5 3A championship games this weekend at the Snake Pit after sweeping Santa Rosa Saturday at the Lions Den.

“We put ourselves in that situation, we should have never allowed that game to get so close,” Span said.

Back-to-back scores from Lions guard Christian Chavez, a 3-pointer and layup, cut the Rattlers' 10-point lead in half with a minute left in the game. A third score by Lions guard Joseph Esquibel cut the lead to three with less than 17 seconds in the game.

This was the second time the Rattlers lost a lead of 10 points at the start of the third period the Lions went on a 10-point run to bring the game within one point.

With time short and needing to regain possession the Lions, 17-9, 4-2, were forced to foul immediately upon inbounding of the ball. Both teams were in the bonus for fouls and this sent Rattler’s guard Ronald Carmichael to the foul line. Carmichael made one of two free throws, giving the Rattlers a two-possession lead and with 15 seconds on the clock made the Lions’ chances of forcing overtime slim.

The Lions called a time out to formulate a plan while a few feet away Span was devising a strategy of his own.

As play started, Lions post Javante Chavez drove the ball to the basket, putting in the layup.

However, Chavez scored on a layup with less than five seconds on the clock and Rattlers shooting guard John Paul Garcia, who scored 22 points, held on to the ball as time ran out.

“We knew they were going to go for the score and try to stop the clock when we inbound the ball,” Span said. “With less then five seconds there was no chance of a penalty from not inbounding the ball after the basket.”

Span said undisciplined ball handling in passing and inbounding the ball by the Rattlers resulted in turnovers that helped keep the Lions in the game. He said this combined with the Rattlers only making 12 of 29 free throws made the game more difficult than it should have been.

Garcia said the team has got to must do a better job of making free throws. He said they have to put the game away when they have a chance especially when the other team sends them to the line.

The Rattlers will play at 6 p.m., Saturday for the District 5 championship against an opponent to be determined at the Snake Pit.

“I kept stressing to the girls to stop fouling, move their feet to get in front of the player and rebound,” said Gary Hittson, Lady Rattlers head coach.

In fact, fouls nearly toppled the Lady Rattlers in the third quarter of the game and coincidentally propelled them to a win.

At the start of the second half, the Lady Rattlers held a 23-20 lead over the Lady Lions.

The Lady Lions, 12-13, 4-2, went on to outscore the Lady Rattlers 12-10 in that period. Eight of the 12 points scored by the Lady Lions were free throws, six from guard Sharmaine Benally and two by forward Kylie Harrison.

“We have to play better defense and not give teams so many points on the foul line,” Martinez said

The contest was decided by three free throws, two made by Lease made and one by Lady Rattlers point guard Ashley Shipley. Shipley’s free throw was the last score of the game, putting the Lady Rattlers up by three in the event of a Lady Lions’ desperation 3-pointer at the buzzer.

The Lady Rattlers will play at 6 p.m., Friday for the District 5 championship against an opponent to be determined at the Snake Pit.

The Logan Lady Longhorns, 19-7, 5-1, clinched first place in the District 6 2A standings Friday, defeating the Lady Buffaloes 51-43, at Melrose.

A day earlier -- in a 69-45 win against Dora -- the Lady Longhorns focused on taking away the screen plays that the Lady Coyotes had used so well the first time the teams met.

“It was a risk to play in a zone defense, but it was a risk we were willing to take,” said Rhyan Daugherty, head coach.

Daugherty said the zone defense succeeded in disrupting the screens but it meant the Lady Longhorns did not have a players in positions for the rebound. He said despite being out of position several times, the Lady Longhorns fought to get the ball on defense.

The Lady Longhorns' defense against the Lady Coyotes was complemented by their strong offensive production.

Foote said the team needs to play their game with intensity from start to finish.

The Lady Longhorns will play at 7 p.m., Friday for the district 6 championship against an opponent to be determined at Logan.

On Thursday the Longhorns won their first district game 59-54 against the Dora Coyotes at Logan.

“This was a good win, we needed this,” said Longhorns head coach Randy Robertson.

Robertson said against the Coyotes, the Longhorns showed the level of talent that had only been seen in spurts throughout the season. He said the team showed a new level of intensity that they need to carry over against Melrose.

Leading the offense for the Longhorns were shooting guard Mike Estrada, with 22 points, and shooting guard Brinton and center Colton Roach, both scoring 15 points.

Against Dora, the Longhorns were able to control rebounds on defense limiting the Coyotes’ second-shot chances. However, on the other end of the court the Longhorns did not follow their shots and were caught out of position with Dora taking the rebounds.

“We have to follow our shots and box out for the rebounds,” Roach said.

In the final 14 seconds of the game Roach did just that and gave the Longhorns a 6 point lead. Roach missed a free throw foul shot, but he followed his shot got the rebound and was fouled while shooting for two more free throws he would make.

“Coach has stressed it to us in practice, follow the shot,” Roach said.

Another area the Longhorns needed to address against Melrose was to close off the lane and not allow players to drive to the basket.

“We can’t let them inside and go uncontested to the basket for the score,” Estrada said.

Robertson said Coyotes post, Mason Foster, hurt them on the inside. Foster was the leading scorer for the Coyotes, with 18 points, 16 of those were layups.

While it seemed Foster was unstoppable in the first half, a charge taken by Estrada in the third period and adjustments by the Longhorns defense shut down his inside attack.

“We have to move our feet, get in front of them and play strong defense,” Estrada said.

The Longhorns played at 6 p.m., Tuesday at Dora, the score was not available at time of publication.

The San Jon Coyotes 12-11, 6-2, are ranked second in the District 4 1A standings and await the start of the district tournament.