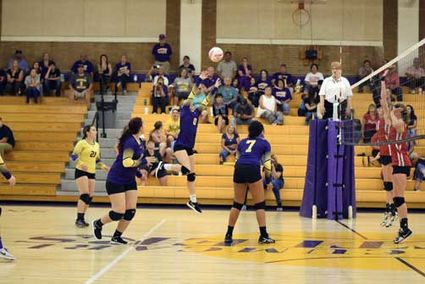 “The girls got behind and just couldn’t fight their way back,” Benavidez said.

Benavidez said in the final two sets the Lady Rattlers fought back from being down double digits to lose by only three or four points. She said the team has shown a lot of mental focus on the floor by not allowing itself to get discouraged.

Benavidez said the Santa Fe tournament will be a challenge for the Lady Rattlers. She said the competition they will face will show them areas that need improvement.

The 0-6 record for the San Jon Lady Coyotes is not what people should be paying attention to, said Coach Jaree Elliott.

“If it could have gone wrong it did, but these girls have not given up,” Elliott said.

Elliott said the 3-0 loss to Roy/Mosquero on Saturday was a turning point for the team. She said the girls are playing aggressively and their confidence is growing.

Elliott said the girls are excited about Thursday’s home game against Des Moines.

“We are a small team but we are fierce,” Elliott said.

Elliott said when the season started the team was made up of five high school players and six eighth-graders. She said knee injuries have changed all that and now sophomore Morgan Becerra and senior Selena Caldera and six eighth graders make up the Lady Coyotes roster.

“I cannot express how proud I am of these young ladies,” Elliott said. “They have stepped up and shown a lot of heart”

The match against Des Moines begins at 5:30 p.m. Thursday.

The 6-7 Logan Lady Longhorns will play at 6:30 p.m. Thursday against Santa Rosa at Logan.