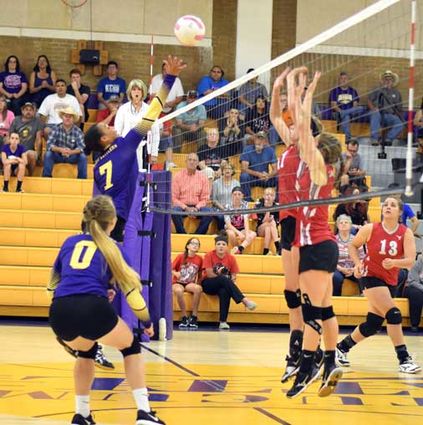 Saturday’s game against Penasco will be the last non-district encounter for the 8-3 Tucumcari volleyball team.

Lease said the team’s working well on defense but there has to be an adjustment made to the setting of the ball on offense.

“We are not getting the ball into position for our front line to attack,” Lease said. “Our back row is fully capable of scoring. However, many times our front-row hitters don’t get a chance to go for the kill.”

Tucumcari will start their district volleyball run on Oct. 13 at Santa Rosa.

In pool play, the Lady Rattlers had two losses against Estancia and split contests against Santa Fe Indian and Newcomb.

• The 6-8 Logan Lady Longhorns will be happy to have Kaylee Foote back from a foot injury to start district play Saturday at Mountainair, said Head Coach Robert Young.

Young said while the team is excited to have Foote back, it may be short Karli Webb to a foot injury of her own.

“The girls have been doing an outstanding job while Foote has been out,” Young said. “Just when it looks like we are going to have our whole team back the injury bug strikes.”

Young said he does not know very much about the 8-4 Lady Mustangs. He said the team lost several seniors from last year.

“They are going to be a young team with some inexperience,” Young said.

Young said during a summer matchup with the Lady Mustangs, Mountainair played good floor defense and hit the ball well at the net.

“We are going to have our work cut out for us on this first district outing,” Young said. “I am confident the girls will play as a team and find a way to win.”

• The 0-8 San Jon Lady Coyotes will be looking to dig their way into the win column Thursday against Elida at San Jon.

The 6:30 p.m., game against the Lady Tigers will be San Jon’s second district game. The Lady Coyotes lost in four sets on Sept. 24 to Floyd at San Jon.