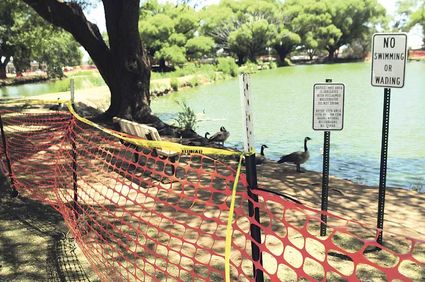 A barrier is in place around the Hillcrest park pond where a 12-year-old nearly drowned last week.

CLOVIS - First responders involved in the July 4 rescue of a boy found in the pond at Hillcrest Park have been advised to seek medical treatment, Clovis City Manager Tom Phelps said on Monday.

"A form of cholera bacteria was found in the pond," Phelps said.

"As a precautionary matter and based on physician recommendations, our personnel who were involved in the water rescue have been advised to start taking a doctor recommended course of antibiotics."

The Centers for Disease Control website defines cholera as:

"... (A)n acute, diarrheal illness caused by infection of the intestine with the bacterium Vibrio cholerae."

The CDC reports the infection is often mild or without symptoms, but can sometimes be severe with "diarrhea, vomiting, and leg cramps," and can lead to death if untreated.

Phelps said the water poses no danger "as long as residents don't go swimming in the pond."

Phelps said he is not aware of anyone contracting cholera in connection with the incident.

Gevion Lewis remained in critical condition Monday at a Lubbock hospital after first responders pulled him from the bottom of the 6-foot pond where he'd been swimming with a brother and friends. He'd been under the water for six to 10 minutes, officials have estimated.

Phelps said it was his understanding city police had notified the other boys' families of the cholera finding and that, "I've not been notified of any sickness of any of them."

City officials began taking precautions to keep others out of the water soon after the accident. Officials have resposted signs prohibiting swimming after they said the original signs recently disappeared.

And over the weekend, a temporary fence was placed around the pond.

"We just felt we needed to barricade or block it off initially," said Phelps, adding that the final fix may not be a wall or barricade of any sort; officials just do not know yet.

Phelps said he and the city's Parks and Recreation Department staff are considering options for what to do about the pond, which is full of water from the city's wastewater treatment plant and used on the park's soccer fields and golf course.

"We just found out so we're not at the point of a plan yet," said Phelps, who was named Clovis' interim city manager in April.