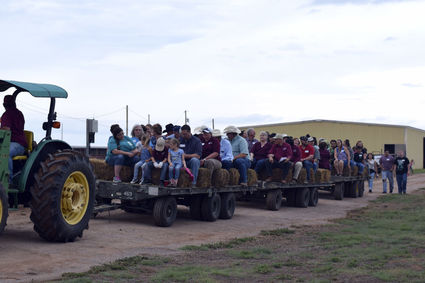 Staff of the NMSU Ag Science Center in Tucumcari took guest on a hay ride to tour the various research projects.

Despite a lower attendance than its prior year iteration, the annual field day at the New Mexico State Universities Ag Science Center in Tucumcari was a success, said Leonard Lauariault, center director.

Lauriault said this year 120 people attended the field day, 14 less than last year's event. He said even with the lower numbers, the field day met and surpassed his expectations.

Lauriault said throughout the year he fields more than 100 calls about research - usually either to gather information or suggest a topic for research.

Lauriault recalled a 2008 incident where a farmer had to terminate an alfalfa field that had been planted for three years due to weak, thin stand and low yield.

Lauriault said the field was replanted but its yield and growth was weaker than the first. He said a dig into the soil revealed White-Fringed Beetles had burrowed into the roots of the alfalfa.

The WFB has since been reported in counties across Eastern New Mexico and in states including south eastern Texas, Arkansas and Louisiana.

"This particular species of beetle can be devastating to crops, including alfalfa, cotton, peanuts, soybean and (both) pecan (and) peach trees," said New Mexico State University Entomologist Carol Sutherland.

Sutherland was one of the NMSU faculty, researchers present at the field day. She said the beetle is dangerous for two reasons - first because it targets root systems, second because no pesticide is available to kill it.

Sutherland said experts are working on finding a way to address this newest problem for agricultural producers. She said for now, suppression by insecticides and rotation of crops is the best course of action. The recommendation is to rotate the crops with a fibrous root crop such as varieties of wheat, grasses and sorghum.

Lauriault said by rotating the crops there are pesticide labeled for the crops and spraying may be more effective. He said one of the major concerns is that the WFB is a hitchhiker - getting onto harvested crops and catching a ride on the equipment used for a shorter trip to other crops.

Lauriault said currently the Ag Center is working on research along with Sutherland on introducing nematodes as a way to combat the WFB. He said a professor at Cornell University, Ithaca, New York, has been conducting research on nematodes that attack species of lava. The hope is that the nematodes will survive in New Mexico's soil and climate and attack the beetle larva.

"We are always working on some form of research that could have the potential for a positive impact on the agricultural industry of our region and state," Lauriault said. "If the nematodes can be raised in this region then it could become a new nitch industry for someone to start in the state."

Lauriault said the continued support of area farmers, ranchers and the communities of the region helps the center to continue to operate. He said with their support the center can continue to contribute valuable research to the agricultural industry.