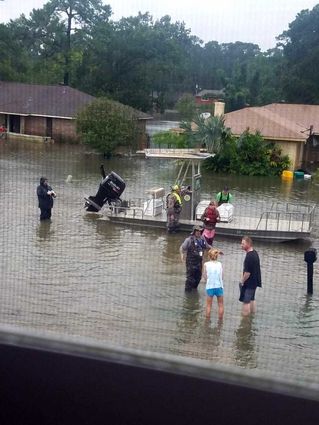 Authorities inform Baytown Texas residents Penny Romero and her son Austin Wilson they have 15 minutes to evacutate on Aug. 29 in the wake of Hurricane Harvey.

After years of living in eastern New Mexico's climate, former Nara Visa resident could not believe the aftermath of Hurricane Harvey, which forced her family to evacuate their home.

"I told my fiancé, 'I'm from New Mexico, I've never seen this much water at one time,'" said Dessaray Padilla, now of Baytown, Texas.

Padilla, who moved from Nara Visa in 1998, said she is currently living in Baytown with her fiancee, Austin Wilson. She said the couple has been staying at the home of Wilson's parents.

Baytown is 42 miles east of Houston. Padilla and Wilson had just returned to Baytown from New Mexico two days before Hurricane Harvey hit.

Padilla said they were able to ride out Harvey, which made land on Sunday and brought 51.88 inches of water to the area. She said it initially appeared the family would be able to stay in their home.

There was a reported total of 45.1 inches of rainfall from Hurricane Harvey from Aug. 26 - Aug. 28 said Don Oettinger, National Weather Service Houston/Galveston Texas.

Oettinger said there have been reports of rainfall totals as high as 50 inches, but nothing has been confirmed.

"There is a bayou located near the home that acts as a drainage system for the flood waters," Padilla said.

Wilson said in the 22 years that his parents have lived at that home the bayou has always prevented the water from flooding the area.

However, on Aug. 29, Padilla, Wilson and his parents were told they were going to have to evacuate the home.

Wilson said to ease the flooding in Houston, authorities were going to have to release water from nearby dams. He said the inflow of this released water would be to great for the bayou to handle and the water was expected to rise another 8 feet.

"Authorities came on a boat and told us we had 15 minutes to grab the essentials and evacuate," Padilla said.

Padilla said at this point the only way to evacuate the area was by boat or air. She said much of the neighborhood was several feet under water.

"I grabbed the important documents (social security cards, birth certificates) and clothes, packed it into a bag and we left," Padilla said.

Wilson said the boat transported the family to a school out of the flood zone. He said from their the family was loaded onto a bus and taken to a hotel.

"In the course of the trip we lost some of our luggage," Wilson said. "That didn't matter though, when we witnessed firsthand the chaos from the storm at the school."

Padilla said they were able to return to their home on Thursday, and discovered the bayou was able to handle the inflow and the house was not flooded.

She said unfortunately many of their neighbors' homes were flooded and damaged by the water.

"We are helping our next door neighbor remove the damaged dry wall," Padilla said. "It still doesn't seem real that all of this happened. Everyone is still on edge. It certainly doesn't help that there is the possibility of another storm hitting this area."