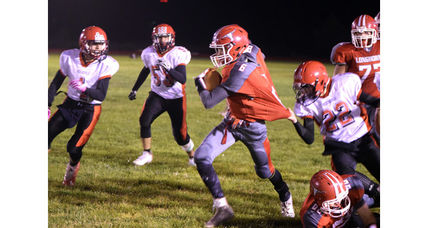 Logan Longhorns Kyle Knight tries to break through the tackles after intercepting the football during Friday's win against Springer.

The Logan Longhorns cruised by the Springer Red Devils Friday for a 48-8 homecoming victory.

"We are finally starting to get healthy," said Scott Dean, Logan head coach. "We have our players back and it is beginning to show on both sides of the ball."

The Longhorns (2-4) gave up only one score Friday night against the Red Devils to get their second win of the season.

It would be all Longhorns after that point. Logan's offense was led by running back Chase Hittson, who scored rushing touchdowns of 3, 1 and 60 yards and caught a 42-yard touchdown from quarterback Kyle Knight.

"We have to continue with this intensity from here on out," Hittson said. "Our offense came up with the big plays needed to win this game."

Knight, rushed for a touchdown and threw two touchdown passes, the throw to Hittson and a 12 yard pass to Mason Collins.

On defense the Longhorns intercepted the ball twice, Collins and Knight, while forcing either a turnover on downs or a punt from the Red Devils.

"We have to continue being aggressive on defense," Collins said. "We can not let the other team come away with the big play."

Dean said the Longhorns have a bye week before taking on their first district 4 opponent, the 5-0, 1-0, Buffaloes on Oct. 13 at Melrose.

"We are coming together at the right time," Dean said. "It is only going to get harder from here on out."

The Tucumcari Rattlers 1-5, will try to work their way back into the win column Friday night against the 5-1 Raton Tigers at Rattlers stadium.

The Rattlers lost 54-0 against the Cardinals Friday night at Eunice.

The San Jon/Grady Coyotes look for their second district win Friday against the Lake Arthur Panthers.