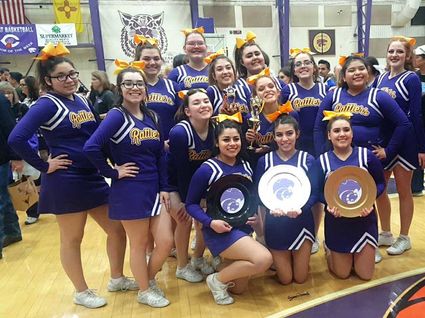 he Tucumcari Rattlers Cheerleaders won five trophies including grand champion on Jan. 27 at the district cheer competition at Clovis.

The Tucumcari Rattlers varsity cheerleaders won the grand championship, first place in 3A and the Spirit trophy at a district event on Jan. 27 at Clovis.

"I am most proud of the spirit trophy, considering we only had a week of practice before the event," said Natalia Gutierrez, cheer co-captain.

Each of the team members had some sort of conflict with the scheduled practice, said Angelina Arellano, co-captain.

Arellano said different members of the squad would get together for practice. She said throughout the week it was hardly the same members.

"We had to piece together the practices up until the competition," Arellano said. "It was stressful, but everyone knew there was no crying allowed. We all had to push through this, we could not afford to get upset."

Gutierrez said the team was one of the only team to incorporate tossing in their act.

"I am impressed with how the team has progressed since last year," said Shannon Arellano, cheer coach. "These girls have improved by leaps in bounds in a short time."

Coach Arellano said the team has to compete in two more district competitions in order to meet the requirements of state cheer competition. She said the teams next event will be Feb. 17 at Roswell.

"At that event the girls will get to see different cheer styles and techniques used by teams we have not seen this season," Coach Arellano said.

Arellano said the 17 members of the competition squad are working hard to prepare for their next event.

"This team has come a long way in the past two years," Arellano said. "We are dedicated to improving with each competition in our quest toward state."