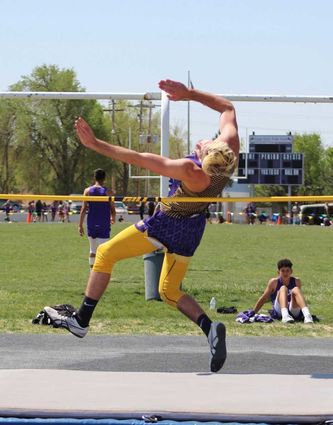 Tucumcari's Rod Dunlap placed second in the high jump Saturday during the District 5-3A track meet.

More than 40 area high school athletes will compete this weekend in the 1A-3A state track and field tournament at the University of New Mexico in Albuquerque.

"In order for us to win a another championship, the boys will have to place where they are seeded and hope Dexter isn't as good as they look on paper," said Wayne Ferguson, Tucumcari head track coach.

The Tucumcari Rattlers boys track and field team won the 2017 3A title and are poised to repeat.

Ferguson said the odds look good if they can overcome top-seeded Dexter, but there are two other schools, Cottonwood and Eunice, who currently are in the running with the Rattlers at second place.

"We had a good showing at the District 3-5A meet Saturday at Santa Rosa that the teams can build on," Ferguson said.

Ferguson said the Rattlers and Lady Rattlers both came in second in team placing.

There are 23 competing for the Rattlers and Lady Rattlers at the 3A state track and field tournament.

The Logan Longhorns, Lady Longhorns will have 21 athletes competing at the 2A state track and field competition.

"We have several athletes that have experienced the level of competition at the state tournament level and we are going to take advantage of that experience," said Robert Young, Logan's head track coach.

Young said the team will be working to move up in some spots while hoping their performance throughout the season will help things to fall into place.

The San Jon Coyotes, Lady Coyotes will have three competing at the 1A state tournament.