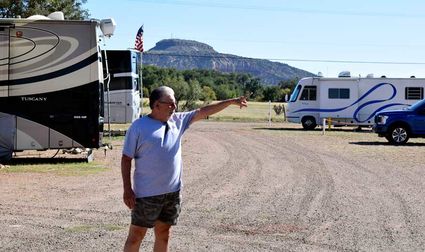 John Castelli, co-owner of the Blaze-in-Saddle RV park in Tucumcari, points to the horse corrals on the facility's west side. The Castelli brothers bought the facility, formerly known as the Empty Saddle RV Park, and reopened it in April.

When the Castelli brothers bought the Empty Saddle RV Park on Tucumcari's east side in April, one of the first things they did was change the name.

That's because the facility since 2009 mostly had lived up to its name - empty.

So a ceremonial rib...