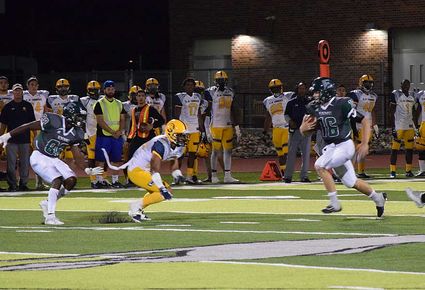 Greyhound quarterback Wyatt Strand takes off on a keeper in the first half of Saturday's game against Texas A&M-Commerce.

For Eastern New Mexico, there was certainly a somber feeling after the game, and it wasn’t necessarily because the Greyhounds now fall to 0-3 on the season — 0-1 in Lone Star Conference play. Instead, it was the disappointed feeling of knowing that they had the No. 1 team in the land on the ropes, but couldn’t finish the job.

The Hounds got a crucial Charles Countee interception early in the fourth quarter. Countee picked off Lions (3-0, 2-0) quarterback Preston Wheeler at the Lion 42, returning it all the way back to the 5.

The interception instantly energized the crowd of 1,601 fans, who were all but out of the game at that point. ENMU soon scored on a Paul Terry 5-yard run, with Terry also converting the two-point conversion. That cut the gap to 14-11 with almost an entire quarter of action still to go.

But, some crucial errors by the Greyhounds down the stretch allowed Commerce to slam the door shut on an upset.

“Super proud of them, they fought hard. Great team coming to town, (and yet) they played without fear, they played hard,” Lee said of his squad. “I told them, ‘Our last six quarters of football, we’ve been a pretty good football team. We’ve played well against two great opponents, so we just got to keep building on our last six quarters.”

Much like the previous weeks, Eastern couldn’t sustain drives. Besides playing against a defending national champion defense that returned almost everyone from last year, ENMU also had to deal with a big and physical defensive line.

And yet, it’s pretty surprising the Hounds only came away with 11 points (eight of which were set up on the Countee interception).

For much of the night, Eastern ran the ball with a pretty good deal of success, until finally getting figured out in the later stages of the contest. The Greyhounds rushed for 161 first-half yards, but had just 47 the rest of the way.

“We had something there that was working for awhile,” Lee said of the run game. “But, when good players see the same thing, after awhile, they adjust and it becomes harder. We really needed to capitalize when we had our opportunities.”

Speaking of capitalizing, ENMU had the previously-mentioned three first-half red zone drives, which really swung the momentum of the game.

Trailing 14-0, early in the second quarter, Eastern converted on a pair of short fourth down plays. However, the third time wasn’t the charm, as Commerce stuffed Terry at the Lion 29, for no gain on fourth-and-2.

A 38-yard run by Wyatt Strand on the next drive brought it down inside Lion territory. But, the drive stalled at the 7, and the short field goal was subsequently blocked.

Finally, Eastern got to the Commerce 12, late in the first half. But, once again, a third down pass was incomplete. This time, however, the Greyhounds did make the field goal.

“We were able to move the chains, and control the clock — which was a positive,” Lee explained. “If those (three drives create) 21 points, this game’s a different game. That really changed the outlook.”

Commerce succeeded on two late first quarter drives, and with Eastern’s offensive struggles, that was pretty much the ballgame.

The Lions, who also have a big and physical offensive line, had a 12-play, 57-yard drive to score their first touchdown. They then quickly added a three-play touchdown drive, highlighted by Marquis Wimberly’s amazing 30-yard catch along the sideline, in which he turned around to locate the ball and somehow kept both of his feet in the field of play.

However, Commerce didn’t really do much until a late fourth-quarter touchdown drive to seal the victory. The 32-yard touchdown run put Carandal Hale above the 100-yard mark.

“Our margin of error is not very big, compared to some other teams. Whenever you give them a little bit, they’re good enough to exploit you. But, I’m very proud of our effort, and we got to continue to get better.”

For the record, the two teams combined for just 416 yards of offense, compared to 595 punt yards. Strand was sacked five times and was 2-of-7 passing with an interception. Terry rushed for 85 yards and a score.

As for Commerce, Wheeler went just 11-of-30 for 103 yards and an interception. Running backs Carandal Hale (101 yards) and E.J. Thompson (85 yards) each scored a rushing touchdown.