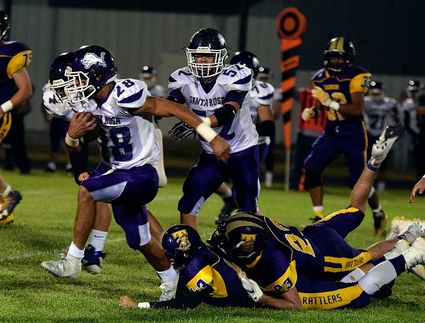 Santa Rosa ball carrier Stephen Sanchez weaves his way through the Tucumcari defense as defenders Robbie Hartmann and Rod Dunlap try to slow him down during a game Friday at Rattler Stadium.

Santa Rosa’s Stephen Sanchez ran for four touchdowns and more than 200 yards — mostly in the first half — as the Lions drubbed rival Tucumcari 46-0 on Friday night at Rattlers Stadium.