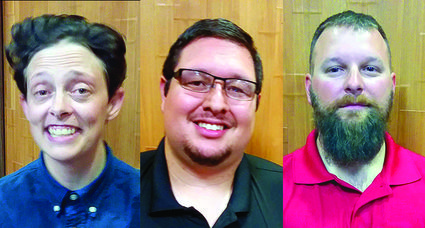 Candidates for the vacant city commission seat are, from left, Shannon Lumpkin, Chris Arias and Nicholas Bradfield. The seat has been open following the July 10 death of Robert Lumpkin.

The three applicants to fill the District 4 commission seat on the Tucumcari City Commission held by the late Robert Lumpkin will face public interviews with the four current commissioners Oct. 11 in city commission chambers, the commission decided Thursday.

The commissioners also decided they would make their choice among the candidates at their regular meeting Oct. 27. The interview work session will begin at 3 p.m. Oct. 11.

Lumpkin's seat was vacated by his death July 17.

City Manager Britt Lusk said each candidate has received a letter with four questions, including:

• Why do you want to be a commissioner?

• What are you qualifications?

• What are you concerns about the city?

• What do you think the duties of a commissioner are?

• What is the difference between being a commissioner and being a city manager?

• What do you know about the commissioner-manager form of city government?

• What do you know about budgets and city budgeting?

The commission delayed action on changing language in the city's cemetery ordinance.

Lusk said the changes are "semantic" only.

Some of the ordinance's current wording, he explained, demonstrates insensitivity.

The commission decided to consider changes in the ordinance at special work session Oct. 18.

In his city manager's report, Lusk said the city's clean-up day Sept. 22 was "a great success."

He said the city's landfill collected 20 tons of trash from cleanup efforts and the city's area for tree branches and tree and bush waste was busy all day.

He also advised Tucumcari City Hall will be staffed by only a "skeleton crew" Oct. 4 to allow city employees to attend the New Mexico Racing Commission's hearing about Tucumcari's bid to host the state's next racetrack casino license.