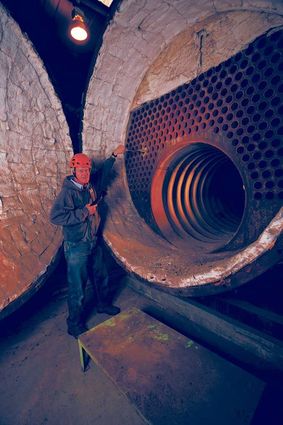 Tucumcari Bio-Energy President Bob Hockaday examines a boiler used to heat digestion tanks at his ethanol plant, which he seeks to convert into a methane-gas plant.

If all goes according to plan, a long-closed ethanol plant in Tucumcari may be converted into a methane plant and become fully operational by mid-2020.

Tucumcari Bio-Energy Co. is hunting for investors and may begin converting the plant to methane gas production as soon as early 2019, said Robert Hockaday, president of the company, during a phone interview. He hopes to acquire the necessary investors and loans by year's end.

Bringing the plant, located on the city's north side, to full production would require 18 months, he said. Once that happens, Tucumcari Bio-Energy could produce up to $12 million in methane, carbon dioxide and compost each year. The plant would employ 40 people during the ramp-up to production, then 20 once it's fully operational.

Ethanol operations shut down at Tucumcari Bio-Energy in 2010 when corn wasn't plentiful in the drought-plagued Southwest. This time, the company aims to use manure in the company's six 55,000-gallon fermentation tanks to produce methane gas. Methane, which is flammable and can be used much like natural gas, holds huge potential as a renewable energy source.

In 2017, Hockaday said the company used a $20,000 grant from New Mexico Small Business Assistance for a preliminary study with New Mexico-based Sandia National Laboratories to see whether converting the company's ethanol equipment to methane production was feasible.

Tucumcari Bio-Energy this year leveraged with two area ranchers, a farmer and Tucumcari Mountain Cheese Factory a $100,000 grant from New Mexico Small Business Assistance to pay for a more comprehensive Sandia Labs study on the methane conversion for the plant. The cheese company was interested because Hockaday wanted to use its leftover whey as an accelerant during methane production.

Hockaday said the "witch's brew" of manure, water, bacteria, whey and other ingredients to produce methane often is unpredictable. It can overheat or, conversely, can cause the gas-producing bacteria to die or go dormant, according to a news release from Sandia Labs.

That's where Sandia Labs came in. Sal Rodriguez, a nuclear engineer, used computer simulations to map out potential trouble spots with the tanks and Hockaday's slurry. Rodriguez showed Hockaday how to modify the tanks to minimize risks and find an ideal temperature range for methane production.

"We wanted it concentrated as much as we can with the most output," Hockaday said of the methane-producing mixture.

When asked where he would get manure for methane production, Hockaday said: "Anyone who's willing to donate it." He added he most likely would procure it from cattle feedlots in the region.

He said once the manure is finished making methane, it leaves a soft, sterile material that can be used for livestock bedding, potting soil or as a soil amendment. All the harmful aspects of cow manure - including E. coli - would be absent after methane-producing bacteria is finished with it.