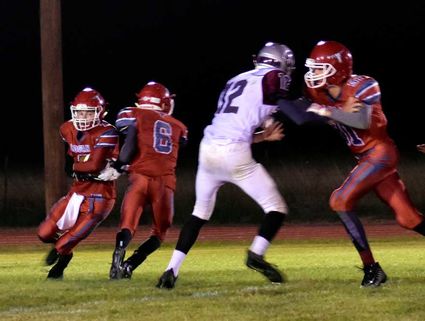 Logan quarterback Kyle Knight hands off the ball to running back Jantzen Paris during an eight-man district football game Friday night against Melrose in Logan. Blocking a Melrose defender is Jason Knight.

Logan has been known for its high-powered rushing offense this season, but it was its defense that rose to the occasion Friday night during a 30-8 district victory over Melrose in an eight-man football matchup.

The Longhorns jumped to a 22-0 lead in the first quarter and held on the rest of the way.

"The second, third and fourth quarters were all defense," Logan coach Chase Disney said. "It was cold and windy, and it worked to our advantage."

Springer/Maxwell prevailed over San Jon/Grady by a 70-34 score during a district game Friday in six-man football.

Dustin Bryant and Chad Becerra each score two touchdowns for the Coyotes (3-2) but couldn't overcome two interceptions and two drives into Devils territory that led to no points.

The Devils (4-2) scored three straight touchdowns in the second quarter to take a 38-20 lead - one they did not relinquish.

"It was a closer game than it appeared," Coyotes coach Adrian Jones said. "We were hanging in there in the third and fourth quarters. We played hard, but it tough to overcome those mistakes."

Fort Sumner, which has a cooperative agreement with House Municipal Schools and has three players from that district on its roster, crushed Crownpoint 55-0 on Saturday.

The Foxes (5-0) are ranked No. 2 in Class 2A and have allowed only eight points scored all season.