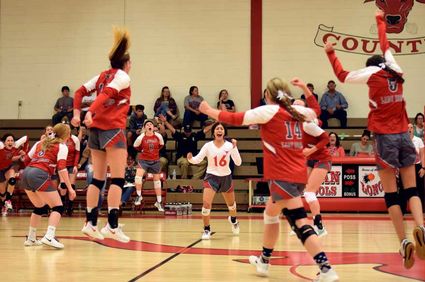 Members of the Logan volleyball team celebrate after clinching the match-winning point against No. 1-ranked and previously unbeaten Melrose during a district volleyball match Friday at Logan.

The Lady Longhorns, 11-4 and ranked fourth in Class A before Friday's clash, knocked off the Lady Buffaloes (10-1) primarily because of blocking. Logan scored at least 13 points on blocks and blunted Melrose's attack.

"That's the best we've blocked this season," Logan coach Robert Young said. "(Melrose) is a really good hitting team, so we knew we had to block them. They picked up a lot of balls after we blocked them, but the blocking took them out of their offense and they started tipping the ball, which is what we wanted."

"We couldn't get anything going," he said. "We had no offense at all because they were there.

"They were really well-prepared. They knew where we were going to attack, and they picked us apart on serve receive. If we're going to beat them, we'll have to serve-receive a whole lot better than that."

Melrose seldom had been tested, sweeping nine of its first 10 matches. The exception: Logan, which fell to the Buffaloes in four Sept. 15 at Fort Sumner's Vixen Classic.

After the Lady Longhorns lost the third game, they began to assert their height advantage on offense as well as defense. The 25-19 score of the fourth game wasn't as close as indicated, as Logan committed five serving errors. Logan took a 4-1 lead early and never relinquished it.

"Our big hitters took charge and really stepped it up when they had to," Young said. "They made some good decisions hitting the ball, too."

In the fifth and deciding game, Logan went on a 5-0 run to take a 12-7 lead. Once the match-winner was tallied, Lady Longhorns on the floor and the bench literally jumped for joy.

Grady / San Jon committed 13 service errors during the match. Elida improved to 7-1 overall, its only loss to Mesilla Valley Christian.