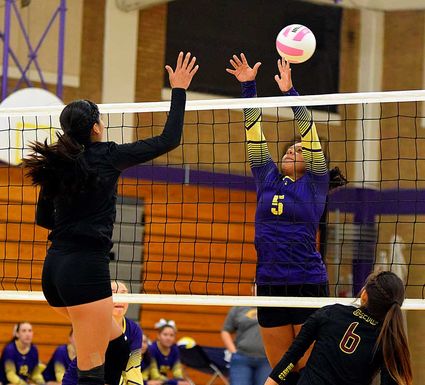 Tucumcari's Aaliyah Brown, right, tries to block a spike by a Santa Fe Indian School attacker during a volleyball match Saturday at the Snake Pit.

"We had a great game," Tucumcari coach Dena Benavidez said of the victory over the Tigers. "It was a team effort. We just kept pushing through."

Benavidez said she made a rotation change midway through the Raton match that put her team's top hitter, Jasmine Jones, in the front row and libero defensive specialist Bryanna Arias in the back. The result: Jones received more attack opportunities (12 kills) and more saves for Arias (18 digs).

"Bryanna got to every ball that was sent her way, and she passed phenomenal," Benavidez said, who also singled out setter Kalani French for giving Tucumcari's offense more potency.

Kalani French also made 10 kills and 32 assists during the match.

"In the first and third games, we played the No. 2 team tough, and that shows a lot of heart," Benavidez said. "If we serve well and continue to do things fundamentally sound, we can play with the best of them. My girls are on the move."

Although the Lady Rattlers hung tough, they seldom got their offense going consistently because of the Lady Braves' service game. That was by design, SFIS coach Brian Gurele said.

"We're known for our serving, and in that second game we took control of that and started being more aggressive at the net," he said. "We want to keep everyone off-balance."