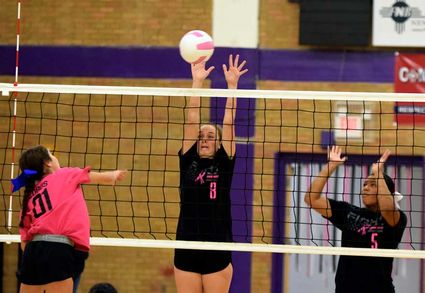 Tucumcari's Lenora Trujillo and Aaliyah Brown try to block a spike by Dexter's Nayeli Cabos, far left, during a volleyball match Thursday at the Snake Pit in Tucumcari.

The Tucumcari volleyball squad emerged triumphant in its first district game of the season Thursday by defeating a young and inexperienced Dexter team 25-17, 25-11, 25-21 during the Lady Rattlers' annual Think Pink match in tribute to women's canc...