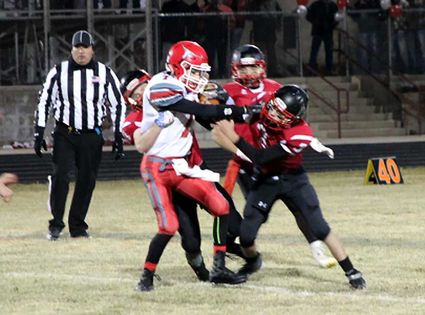 Logan's eight-man football season came to an end Friday with a 60-12 loss to Mountainair in the state quarterfinals.

The Longhorns ended their year at 5-7 overall. The Mustangs, seeded third in the state tournament, improved to 9-1 overall and will face second-seeded Tatum (8-2) on Friday.

The Mustangs stifled the Longhorns' rushing offense for much of the game, including scoring 28 unanswered points in the third quarter.

Logan coach Chase Disney said several of his players had battled nagging injuries in recent weeks, and "our kids wore down" against Mountainair's defense and cold weather, which dropped into the low 20s near the end of the game.

The Longhorns also threw three interceptions when they were prompted to throw more as they fell behind.

Logan quarterback Kyle Knight led the Longhorns offensively with 141 yards rushing on 17 carries and a touchdown. In the air, he was 8-for-17 for 54 yards with a touchdown and three interceptions.

"They're going to be missed by the Logan football program," Disney said. "I wish them the best in the future."

Knight finished the year with 2,863 rushing yards and 21 touchdowns. He totaled 3,363 all-purpose yards. Earle made 84 tackles on defense on the season.

Host Fort Sumner blasted Newcomb 56-6 in the quarterfinals of the Class 2A football playoffs Saturday.

The Foxes (9-1), which have a cooperative agreement with House Municipal Schools and has three players from House on their roster, travel to Santa Rosa (10-1) at 7 p.m. Friday for the semifinal. It's a rematch of regular-season finale, where the Lions won 22-6.

The winner of that game plays the Eunice vs. Estancia winner in the championship Nov. 24.