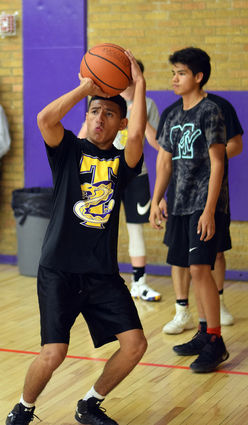 That's what Tucumcari boys basketball coach John Span hopes for this season from his undersized team.

"We have no size, but we do have some quickness," he said. "I think we will be able to get up and down the floor. I think a big key for us to be successful is to limit teams to one shot, then we can get down the floor in transition. We like an up-tempo game. We'll do a little bit of pressing. We like to transition back after missed shots and push the ball up and down the court.

"I think this team will be fun to watch," Span added. "They're' going to play hard. Hopefully we'll have a product out there that folks will enjoy and want to come back out and watch."

As a result, Span, who is entering his 15th season leading the Rattlers, expects inexperienced or young players to fill out the varsity roster.

"We're going to have to have kids who step up and fill those spots," he said. "I see some potential with the guys we have."

Tucumcari's first game is at home Friday in the Snake Pit against Laguna Acoma. The night's slate includes junior-varsity and girls games. The slate of games begin at 4 p.m., with the varsity boys expected to tip off about 7:30 p.m.

Span said he expects tough games against Dexter, which is laden with seniors and quickness. He said Tularosa typically is "scrappy" and well-coached. He didn't have much information about NMMI, a newcomer in the revamped district.

Regardless of foe, Span foresees what's needed for success when the district schedule begins.

"I think it's going to be a matter of who shows up to play each night and who does a good job taking care of the ball and making good shots," he said.

Eight athletes from San Jon and one from House have joined a Bronchos squad that has 13 players returning. Grady finished 17-13 overall last season; San Jon was 4-17. House hadn't fielded a team for years.

Grady coach Jonathan Langan, in his second season, likes what he sees so far, even with the adjustment of players from San Jon and House meshing into the program.

"We've practiced with real energy, and I'm getting pretty excited for the season," he said.

The Bronchos' first game is at Grady on Saturday against Elida. The varsity tip-off should be about 7:30 p.m.

All varsity home games will be at Grady, except for a Jan. 17 game against Roy/Mosquero at San Jon.

Kyle Griffiths enters his second year with the Logan program after the Longhorns finished 14-12 last season.

Griffiths said he uses a man-to-man defense with some full-court pressing because his ample team speed is well-made for the latter.

The Longhorns face a tough district schedule with Class 1A champion Melrose, Class 2A champion Fort Sumner, a Grady team fortified by a new cooperative agreement with San Jon and House, and Clovis Christian.

Logan's first game is Friday at Clayton, but its first home-court matchup won't be until Dec. 20 against Maxwell.