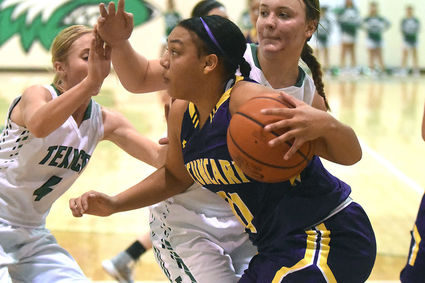 Tucumcari's Jasmine Jones drives the baseline against a pair of Texico defenders in the fourth quarter of Friday's Citizens Bank Tournament semifinals.

The Tucumcari girls basketball team finished fourth at the rugged Citizens Bank Tournament in Texico after losing 73-52 to Farwell in the third-place game Saturday.

Farwell (20-2) came into the tournament ranked sixth in Class 2A in Texas by MaxPreps.com and played up to its billing, draining 15 3-point shots and handing the Lady Rattlers (6-3) their worst loss of the young season.

"The girls never gave up and played with a lot of heart," Tucumcari coach Gary Hittson said. "This tournament will help us get ready for the rest of the season. Playing teams like Farwell will only help us get better."

Tucumcari was ranked No. 3 in New Mexico's Class 3A before the tourney.

Tucumcari had a chance at revenge after suffering its first loss of the season to Texico the previous week. But the Wolverines controlled the Rattlers during crunch time again during a 53-43 win in the semifinals Friday of the Citizens Bank Tournament.

The Wolverines nailed consecutive 3-pointers from Baylee Sours and Jasmine Davalos with just over two minutes to play, and Tucumcari couldn't do much from that point. The Rattlers had only committed two team fouls in the half, and they burned most of the remaining clock to get to seven and put the Wolverines at the line. Tucumcari scored just four points in the fourth quarter, and Texico ended the game with a 9-0 run.

"The fourth quarter we started out well, but we started to turn the ball over. We need to learn not to hang our heads with things don't go our way," Hittson said.

Sours led the Wolverines with 19 points, and Ashley Hill added 15.

Tucumcari crushed Eunice 63-9 during the opening round Thursday of the Citizens Bank Tournament.

Shipley scored 20 points to lead the Lady Rattlers, who carried a 43-5 lead at intermission.

The Cardinals were held to 1-of-3 free-throw shooting for their only point of the second and third quarters.

"We got our press going, forced them into a lot of turnovers," Hittson said.

Herrera added 16 for the Rattlers.