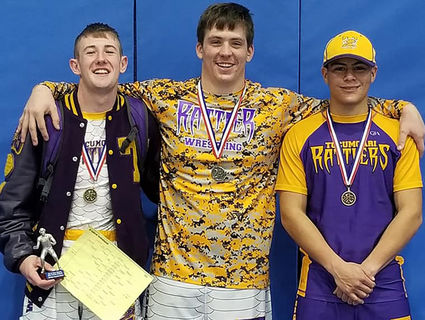 Top Tucumcari wrestling medalists at the Al Salazar Invitational were, from left, Rod Dunlap (first at 152 pounds), Kaleb Hayes (second at 220) and Joe Martinez (third at 152).

The Tucumcari wrestling team finished sixth at the 15-team Al Salazar Invitational at St. Michael's in Santa Fe over the weekend in a tournament that featured many schools whose programs are much larger than the Rattlers'.

Tucumcari's Rod Dunlap continued his unbeaten streak by winning the tournament title at 145 pounds. He won by forfeit in the championship match after Cleveland's Anthony Bachicha hurt his knee in the semifinals. Dunlap improved to 16-0 on the season.

Rattlers teammate Kaleb Hayes, wrestling at 220 pounds, finished second after suffering a loss by pin to Cleveland's Deon Hunter in the title match.

Tucumcari coach Eddie Encinias said two more of his wrestlers, Julian Vargas at 132 and Caleb White at 138, looked stronger by dropping down a weight class and hopes he can keep them there. White finished fourth and Vargas fifth in the tournament.

Though mostly satisfied with his team's performance, Encinias still saw opportunities for fine-tuning.

"One thing we need to work on is our upper-body throws," he said. "Right now, we're taking out guys more on (lower-body) shots. We need to combine both of them. With upper-body, we need to throw people around when we have the opportunity. We're not taking advantage of that."

Tucumcari's next matches are at Bernalillo on Saturday.