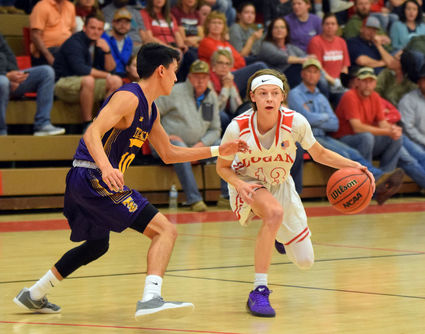 Logan (11-2), ranked No. 3 in Class 1A by MaxPreps.com, had trailed virtually the entire game until midway through the fourth quarter, then hung on despite shooting an abysmal 1-for-7 from the free-throw line during the quarter and 11-of-29 for the game.

Tucumcari coach John Span lamented that his team's chronic struggles at the free-throw line resurfaced when Logan was struggling, as well.

"I don't care what they shoot; we've got to do a better job at the line," he said. "My hat's off to Logan; they made the plays when they needed to. There were a couple of times late in which we should have gotten a layup and threw the ball away."

Tucumcari raced to a 17-5 lead in the first quarter, punctuated by a 3-point shot by Lampkin just before the buzzer.

The Rattlers, despite a few shaky moments, maintained a lead throughout the second and third periods.

"I just put some different kids in, trying to find a lineup that got some things going and got us easy baskets," he said. "We also got some defensive stops to turn the game around."

Two Tucumcari players fouled out during the fourth quarter, hurting its chances for a victory. Span also said his Rattlers didn't handle its defensive responsibilities well against Earle.

"We had key kids in foul trouble that got us the lead," Span said. "We got guys who were reaching in, trying to steal the ball. We got kids that were standing behind a guy who has position and they were trying to go over the top from behind. The referee's going to call that. We should have been fronting him or at least cornering (Earle). Once he caught the ball inside, he knew how to use that big body. He's a load."

Logan's Jantzen Paris scored with 1:12 left to give his team what proved to be a decisive a 55-53 lead. The Longhorns didn't make it easy on themselves, missing three of four foul shots after that. But the Longhorns grabbed an offensive rebound after a miss with 14.9 seconds left and milked the clock until a foul with 2.2 seconds left.

Tucumcari rebounded after another missed Logan free throw and called timeout with 1.1 seconds left. The Rattlers tried a long pass to a shooter near the corner, but Logan defenders broke it up.

Span said he understood why a win by Tucumcari at Logan could have been regarded as an upset, but he wasn't buying it entirely.

"I felt like we should have beat them because they're a smaller school," he said. "That's the way I look at it. But they're a tough team, and (Griffiths) does a good job."

Six-foot-3 Parker Sweat led the Timberwolves (4-5) with 16 points, and 6-foot-2 teammate Aaron Talamante added 11 points. Tucumcari has only one player on its varsity roster over 6 feet tall – 6-1 Ramos, who led the Rattlers with 11 points.

"Their big kid, once he caught the ball, we didn't match up well against him, and he could score," Span said.

"He was pretty strong today, and our guards were finding him," he said. "Our defense was pretty good, as well."

"It was one of those nights where we couldn't hit shots," he said. "If we'd hit some, maybe it would've made it a different scenario. There were a few times we got lazy and didn't box out. But overall, I thought we played hard."

Vigil said he was worried about his team after a layoff because of a snowstorm in the Albuquerque region.

"We'd missed two days of practice, but this is a good group," he said. "They executed well and knew what to do, despite the rust."

The Rattlers went more than five minutes without a score during the first half, allowing the Timberwolves to take a 19-8 lead. East Mountain's lead ballooned to 20 points by the third quarter, an Tucumcari never threatened.