Gravel pit could get new life 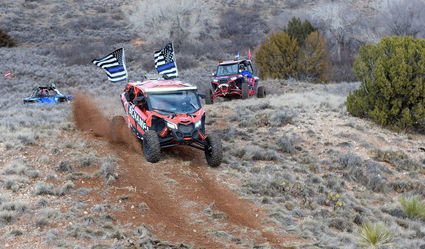 An old gravel pit north of Tucumcari doesn't look like much, but Robert Kryder envisions it becoming a venue for a big off-road racing event later this summer that will bring lots of business to the city s motels and restaurants.

Kryder, officials from Outlaw Desert Racing and other volunteers in all-wheel-drive vehicles this past weekend used their vehicles to carve racing trails into the hilly dirt. Kryder said the site would become a 4- to 5-mile track, called Flintstones ORV, that will host a racing event in August. ORV stands for off-road vehicles.

Chris Brahs, an Albuquerque-based owner of Outlaw Desert Racing, said Saturday he was enthused by the reception he's received from Tucumcari residents on the prospect of an off-road racing facility there.

"Everyone we've met is excited," he said.

But he also is focused on what needs to be done first.

"We've got work ahead of us because of the mesquite," he said, gazing on the varied terrain of the Flintstones ORV site. "The sagebrush is no big deal. But with mesquite, we're going to need big equipment for a couple of spots."

Brahs said the long thorns in mesquite could puncture even the toughest of off-road tires. So it needs to be removed with a bulldozer.

One of the off-road vehicles on display Saturday was a $250,000 vehicle with a 625-horsepower engine that can go 140 mph. That may sound impressive, but Kryder said big events could draw trucks with 1,200-hp engines.

Kryder said racing stars such Robby Gordon have shown interest in desert races such as the one Dynotraxx has planned for August. If his eventual plans for a national off-road event come to fruition, it will draw 300 to 400 entries. The one later this summer is expected to draw up to 100 entries.

"It'll be big for Tucumcari. When we do a race here, we're going to fill all our hotels and RV parks," he said. "The town has to be prepared in some case because if they don't have the resources, (the visitors) will drain everything in the first afternoon.

Kryder has established a mud-bog venue just off Route 66 on the east side of town. After Flintstones ORV is set up, he wants to open a rally-driving school on 60 acres with the help of Mesalands Community College. He said the only two such rally schools in the United States have three- to five-year waiting lists for people who want to enroll. Kryder wants to get the rally school up and running by 2020.

Brahs, a disabled Air Force veteran, offers to disabled veterans rides in racecars during the pre-run portions of races "to bring back smiles to those who have given up so much, " it states on his business card.

Brahs offered a ride in his off-road racecar back to a parking area on the edge of the course. The return trip over the hills and arroyos felt much like a roller-coaster ride, except louder, bumpier and seemingly faster.