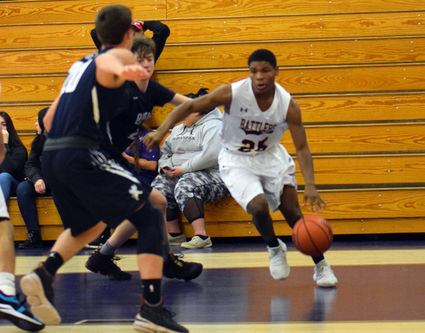 Tucumcari's TJ Lampkin dribbles up the baseline against Santa Fe Prep during a game Saturday at the Snake Pit.

The Tucumcari boys basketball team came out on the short end of a 57-56 game Saturday against Santa Fe Prep that featured six lead changes, including two in the final minute.

Casey Carter, Matthew Lopez and Gerardo Villa-Vargas led a 3-point shooting rally to give Tucumcari a brief lead in the fourth quarter. Carter's potential game-winning shot as he drove the baseline in the final seconds bounced out of the rim, and the Blue Griffins (5-4) rebounded to preserve their slim victory at the Snake Pit.

Santa Fe Prep coach Brent Cooper was relieved, as his team previously had a hard time foiling coach John Span and his Rattlers, who fell to 2-11.

"Coach Span always has his team playing great," Cooper said. "The fact his team came back in the fourth quarter wasn't a surprise. This is the first time in five years we'd beaten Tucumcari, so we're happy. They'd had our number. If it was a half-point win, we'd be happy."

Both teams saw key starters foul out. Both also struggled from the free-throw line. Tucumcari went 16-for-27 on free throws, and Santa Fe Prep was 16-for-24.

But it was Santa Fe Prep's Sam Cooper who gave his team the final margin by converting two foul shots with 24 seconds left.

Tucumcari trailed in the game before tip-off. Span had forgotten to put Villa-Vargas in the official scorebook, leading to a technical foul and free throws for the Blue Griffins for a 2-0 lead before a single second had expired.

"It was an oversight on my part," Span said. "I can't blame anyone but myself because I fill the book out.

"Then he comes up and hits that big three (late in the game)," Span said, smiling at his odd fortune with Villa-Vargas. "That's huge."

The game's seesaw momentum saw Tucumcari take a brief 23-19 lead in the second period on Lampkin's 3-pointer, then the Griffins rallying for a 27-23 lead at intermission.

Santa Fe Prep led by as many as 14 points (47-33) early in the fourth quarter. But the Rattlers came clawing back when they got hot from behind the 3-point line.

Carter made a 3-pointer with 42 seconds left to close the gap to 55-53, and Villa-Vargas buried another 3 seconds later to give the Rattlers a brief 56-55 lead. Tucumcari fouled on defense right after that shot, giving Cooper the opportunity at the foul line to give Santa Fe Prep the lead again.

Span lamented that mental flub by his team.

"You don't foul when you're ahead," he said. "You got to make them earn (the points), especially when they're in the double-bonus when we foul."

"They jumped on us at the beginning," Span said. "They hit their shots, and we didn't. They did a better job putting the ball in the hole than we did."

The Rattlers outscored Raton 19-11 in the final quarter, but it wasn't enough.