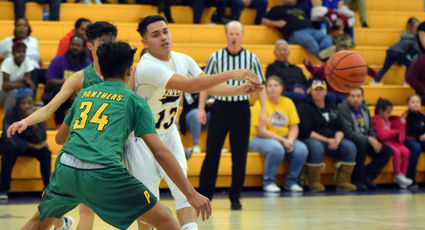 Above: Tucumcari's Matthew Lopez makes a pass against Pecos defender Jodaiah Padilla during a game Saturday at the Snake Pit.

The Pecos boys basketball team won a state title the last two seasons, and it looked ready to go for another during a dominating 84-45 victory Saturday over Tucumcari at the Snake Pit.

The Rattlers (2-13) actually held a 10-5 lead during the first quarter, powered by 3-point shots from Robbie Hartmann and Jesus Ramos.

Tucumcari coach John Span said he was impressed with the Panthers.

"They got the ball in the hole several times where I thought we were in great defensive position," he said. "They get up and down the floor well, they move well, they anticipate well, they play defense, they play offense. But one thing I'll say: Our kids never quit. They played hard."

Ramos led the Rattlers with 14 points, and Hartmann added 11.

"That's one thing we hope is always working well: our defense," Harge said. "When we weren't making shots, especially early in the first quarter, we had to rely on that defense. It was good we came through with that.

"I know Tucumcari is struggling this year, but they really pushed us. I like what Coach Span is doing; they're a very disciplined team. It was a good test for us, especially on the road."

The Rattlers led 41-33 at the end of the third period Thursday at host Clayton, but the Yellowjackets outscored them 24-11 the rest of the way to secure a 57-52 victory.

"In the fourth quarter, we were missing shots," Span said. "Clayton turned it up and got aggressive with us. The officials weren't calling it, and we don't match up well against them. They pounded us inside and were doing a good job finishing. We didn't hit the open shots that would have gotten us the lead near the end. That was the difference in that ballgame."

Span said having Arguello back in the varsity lineup was welcome.

"He gives us another guy who can score," he said. "He's not in shape yet, but he'll get there."