Taylors face up to 36 years in prison; can be convicted or acquitted separately 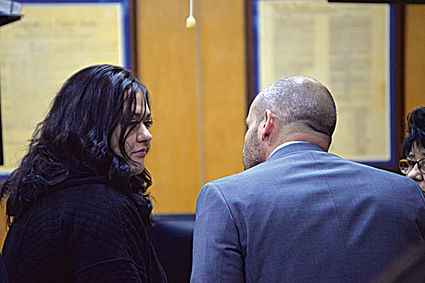 Sandi Taylor, at left, and her mother Mary Taylor talk with their defense attorney.

PORTALES - Mary and Sandi Taylor did most everything together while running their daycare. Now they sit together facing trial for the 2017 death of one young girl in their care and the serious injury to another.

Since 2013, the duo ran "Taylor's Tots" daycare from their residence in Portales, earning a good reputation for looking after young children.

In February 2017, they passed a semi-annual inspection from the state's Children, Youth and Families Department, and five months later a surveyor with the agency visited to start the initial phase of transferring the daycare's ownership from Mary, now 67, to her daughter Sandi, now 33, as they'd both planned.

Later that same hot day, however, tragedy changed their lives and others.

"Everything changed on July 25, 2017," District Attorney Andrea Reeb said Wednesday morning in her opening statement, addressing the jury to the accompaniment of pictures of the two child victims broadcast on a screen in the Roosevelt County courtroom.

Maliyah Jones and Aubriauna Loya, both under the age of 2, sat inside a closed vehicle parked outside the daycare for a "conservative estimate of two hours and 40 minutes" with no air conditioning during that sweltering summer afternoon, Reeb said.

District Judge Donna Mowrer on Monday denied a defense motion for a directed verdict, with the case going to closing arguments and the jury on Tuesday.

Reeb argued in trial that the Taylors were in violation of CYFD guidelines and gave inconsistent statements about the incident, asking the jury of nine men and seven women to find the women guilty of reckless child abuse.

In subsequent interviews, the Taylors struggled to explain what happened: they "loved those babies" and didn't mean to forget them, they said, but neither did they do a head count after a field trip with 12 children that afternoon to the park.

They returned to the daycare before 1 p.m. in two vehicles, but failed to bring in the two youngest, bound to car seats in the black SUV piloted by Sandi Taylor.

When a CYFD surveyor called after 3 p.m. requesting documentation related to the change in ownership, Sandi Taylor went to the vehicle to drive down the road and fax documents she told police, and found the two girls slumped in their seats.

She screamed for her mother; they brought the two girls inside and frantically attempted resuscitation while calling 911. It was a chaotic scene, as recognized many times over by first-responders testifying in trial and seen in lapel footage from the first Portales police officers on scene.

"Please, in the name of Jesus, wake up!" Mary Taylor shouts in the video while officers swoop in the kitchen to assist.

In additional lapel footage shown to the jury, Mary Taylor followed the officers outside, hands clasped to her face and sobbing.

"Please give her mouth to mouth," she urges. "Dear God, if you've ever done a miracle, do a miracle now, Lord."

Defense attorney Tye Harmon called the incident a "tragic accident" and emphasized that swift response from the Taylors in his opening statement, arguing they had no awareness of leaving the children in the car but reacted immediately once they did.

Awful, indeed, was the outcome. Maliyah Jones, a "sweet and happy baby" of 20 months, was pronounced dead on arrival at Roosevelt General Hospital, Reeb said, while Aubriauna Loya, just a month shy of her second birthday, survived "against all doctors' predictions" but "has had to relearn everything in her life."

Both girls' mothers dropped them off at daycare that morning "not knowing that this was going to be the worst day of their life," Reeb said, and on Wednesday both women testified about that dark day.

Erika Tafoya said she was working at a Clovis dentist office that afternoon and couldn't check her phone until she'd already missed about 10 calls. She was told only that her daughter Maliyah was in the hospital and learned the rest on arrival there.

"I don't really remember much after that," she said. Nor has she been back to her apartment since, living now with her mother and brother. Life for her since then, she testified, has been "just a mess."

"Nothing like I pictured," she continued. "You're supposed to have your kids forever."

Tafoya had taken a picture that morning of her daughter, smiling in a butterfly-emblazoned white tank-top shirt and holding a tablet for learning the ABCs. Maliyah talked a lot, said her mom, and lately had been smitten with the nursery rhyme "Ring around the Rosie."

A forensic pathologist from the Office of the Medical Investigator in Albuquerque testified Friday regarding Maliyah Jones' autopsy, stating she had a body temperature exceeding 109 degrees. Dr. Matthew Cain said her cause of death was hyperthermia, or heat stroke, and that the manner of death was ruled "accidental," though that "does not preclude any kind of legal proceedings."

As for Aubriauna Loya, who was airlifted to a Lubbock hospital and persevered through 20 percent odds of survival, her mother said the recovery is still ongoing.

It wasn't until August that she spoke again, and not until September 2017 that she walked again. She was released that same month from the hospital and today attends speech, occupational and physical therapy twice a week. Aubriauna can hold a sippy cup again, but can't quite yet stack blocks with her left hand.

"It was very hard and challenging for her," Ashmore said. "She doesn't understand what's happening, or what happened."

In footage from an interview with police the evening of July 25, 2017, Sandi Taylor takes several deep breaths and tilts her head back, whispering a prayer while waiting for officers to return with some water before continuing questioning.

She asks again about the condition of the girls who had been pulled less than two hours from her SUV. She says she keeps on seeing them the way she found them, slumped in their seats.

"They're not OK?" she asks detectives Chris Mitchell and Nate Hyde, the latter of which came Friday from Colorado to testify. "I can't believe that I forgot them. I literally forgot them in there."

She told the detectives she didn't know why she and her mom didn't do a count. Another young girl in her SUV had an accident on the drive back from the park, so Sandi Taylor took her inside immediately for a change of clothes, then the children went to nap or watch a movie. She said she spent some time on paperwork then and wasn't checking on the children.

"The summer's a bit more laid back than spring and fall," she said.

Sandi Taylor kept a prayer card at her seat during trial Friday, when the jury watched video of that interview lasting the better part of an hour.

They are in trial together but can each be convicted or acquitted separately, and face a sentence of up to 18 years in prison on each count.

The Taylors were released on bond in August 2017 and appeared with Harmon during the trial last week but did not take the stand. The courtroom was full most days, with relations of the child victims and their supporters on one side and family of the Taylors on another.

The state rested Friday afternoon, and attorneys spent the last two hours of the day arguing Harmon's motion for a directed verdict in the Taylors' favor from presiding judge Donna Mowrer.

Harmon said the state had not met its burden of proof, that the statute was confusing and poorly written, and that the Taylors could not be guilty of reckless endangerment since they were "unaware of what was happening."

Assistant District Attorney Quentin Ray responded that "forgetting is not a defense" and said it should be apparent to everyone that "you can't leave kids in a hot car."

"Just because the Taylors forgot about them does not equate to that they never knew they were there," he continued. "Losing awareness or forgetting the child does not mean that is an accident."