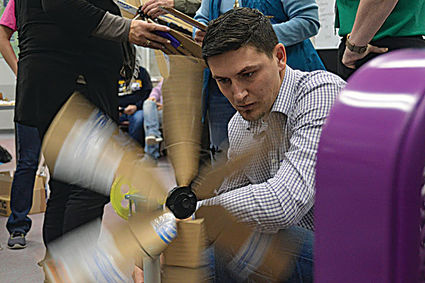 With a box fan for the wind, Tucumcari Middle School teacher Bobby Kandel monitors the energy produced by his makeshift turbine during the afternoon workshop in Clovis.

For local educators in search of relevant lessons for their students on concepts of engineering and energy careers, it doesn't get much more hands-on than climbing inside of a windmill.

Some 30 teachers from districts in Curry and Quay counties had that opportunity Friday, first with a day of workshops at Clovis High School and then with a sunset field trip to the turbines in progress at the Grady Wind Farm and those already completed on the Broadview project.

A Science, Technology, Engineering and Mathematics workshop during the day brought teachers into small groups, where they first fashioned simple machines from string, paper, tape and cups and later carved more elaborate turbine blades that they tested with box fans. The idea is that they can then use those approaches as a jumping-off point in their lesson plans for students.

"All of our kids in this area are familiar with wind farms; now we can make these real-life connections," said Kesha Faircloth, who teaches second grade at Barry Elementary. "And it's STEM, so it's the future."

Nagarajan Bandla said he was excited to incorporate mathematics into wind power lessons with his students at San Jon schools.

"This is like a wonderful experience for us," he said.

Estevan Garcia, who teaches eighth-12th grade ag in Grady, said a peek into the mechanics of a wind turbine can take a student's relationship with the giants of eastern New Mexico to a new level, "instead of just looking at them and saying how cool they are."

Melrose schools science teacher Alan Daugherty concurred, noting "stuff like this can help to spur them on" in considering the real-world applications of the concepts in their textbooks.

CHS Librarian Jenny Jeffery participated in the workshop and enthusiastically explored the sites on the ensuing field trip out to the wind farms. The tour carried teachers and representatives of KidWind, ReCharge labs and Pattern Development (who partnered with CMS and Mesalands Community College on the program) in a school bus to see various stages of turbine construction.

The first stop was an excavation site for the Grady Wind Energy Center, resembling a crater in the earth punctuated with a stone and rebar foundation that will eventually support a turbine of more than 260 feet in height.

The bus went next to one of 141 existing turbines on the Broadview energy project, offering teachers the vertiginous perspective of staring directly up from the base of the monolithic structure and watching its blades slowly rotate.

The tour carried on past the completed substation for the Broadview project and another one in progress for the Grady project, which broke ground in August and is expected to be operational by summer.

The last stop was to a partially erected turbine on that latter, which is about 10-percent of the way toward its goal of 84 turbines. The Broadview and Grady projects combined will make for the largest wind farm in New Mexico, said developers, but efforts nationwide to harness wind energy are becoming increasingly ambitious.

Officials with Pattern Development said they hoped to return to eastern New Mexico as soon as possible to follow up on wind energy education and to put on similar programs for districts in Roosevelt County.