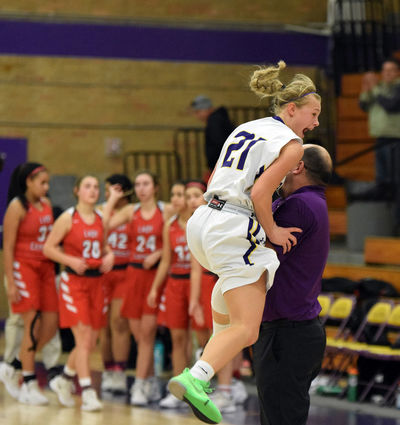 Tucumcari's Ashley Shipley jumps for joy in front of assistant coach Patrick Benavidez after the Lady Rattlers defeated No. 1-ranked and previously undefeated Robertson 39-36 in overtime Saturday at the Snake Pit.

It took an uncharacteristic offense, a lot of effort and overtime, but the Tucumcari girls basketball team on Saturday stunned top-ranked and previously unbeaten (Las Vegas) Robertson 39-36 at the Snake Pit.

Kalani French and Ashley Shipley's free throws in the final minute of OT secured the Lady Rattlers' victory. After the final buzzer, Shipley jumped for joy in front of Tucumcari assistant coach Patrick Benavidez as other teammates also celebrated.

French led a balanced attack with 10 points, while Shipley and Jasmine Jones each scored nine. Aliyah Herrera added eight points as Tucumcari, ranked third in Class 3A by MaxPreps.com before the game, improved to 16-4 overall.

Tucumcari head coach Gary Hittson said he knew he'd have to try a different approach against a taller Robertson team. The Lady Rattlers - usually a run-and-gun team - used a patient and spread-out halfcourt offense instead.

The deliberate approach gave Tucumcari more field-goal attempts close to the basket and drew more fouls. The Lady Rattlers went to the foul line 25 times and converted 16. The Lady Cardinals went to the free-throw line eight times and made four. And Robertson's top scorer, Alianza Darley with 13 points, fouled out with seconds left in regulation.

"We got in foul trouble; that hurt us," Robertson coach Jose Medina said. "In overtime, we didn't have our main players in the game, and they did. It worked out for them. We weren't aggressive with the basketball like they were. We just backed off.

"I give Tucumcari a lot of credit. Coach Hittson did a good job with them and, hopefully, we'll see them down the road."

The Lady Rattlers' victory required a team effort. French's slashing style helped her get open for inside shots. Jones made her presence known on the interior and became an outlet to help break Robertson's press. Herrera nailed two crucial 3-pointers. Shipley assumed much of the ball-handling duties and scored all of her points on free throws. Aaliyah Brown played her usual strong defense and rebounding.

Both teams had trouble establishing much of a rhythm against each other's stout defenses during the first quarter. Robertson led 7-6 at the end of the period.

Herrera opened the second period with a 3-pointer and made a layup after a steal to help give her team a 12-8 lead at halftime as Robertson continued to struggle.

Tucumcari maintained a five-point edge for much of the third period until Herrera sank a 3-pointer from the top of the key at the buzzer to give her team a 23-15 lead.

The Lady Cardinals whittled away the gap and briefly led 30-29 with 1:30 left in regulation after scoring off an offensive rebound.

Shipley made three of four free throws - including after Darley's fifth foul - in the final 90 seconds to give her team a 32-30 lead.

Robertson's Jazmyne Jenkins sank a short jump shot at the buzzer to send the game to overtime.

Tucumcari scored the first four points of overtime - all from the free-throw line -to take back the lead.

With 42 seconds left, French converted one of two foul shots for a 37-34 edge. Robertson scored on an offensive rebound to make it 37-36 with 21.3 seconds remaining.

Robertson took a time out to set up a final play. Tucumcari played strong enough defense to force the Lady Cardinals to use more time than they'd liked and prevented an open 3-pointer. Robertson tried in vain several times to score after offensive rebounds. Time expired, touching off Tucumcari's celebration.

"The thing I hate is we won't have another game for two weeks (until district play)," Hittson said. "I wish we had another game so we could keep going."

The Lady Rattlers scored the first 22 points and allowed just three field goals in the first half during a 60-17 rout Friday over Bosque at the Snake Pit.

Shipley scored 15 points to led Tucumcari, while Herrera added 13 in a game where the second-stringers received a lot of playing time.

Tucumcari led 22-2 at the end of the first quarter and increased the lead to 30 midway through the second period and to 40 in the third. The Lady Rattlers smothered the Bobcats with their press and half-court defense, forcing many turnovers.

"We pressed, they didn't respond well, and that was it," Hittson said, summarizing the game.

Santa Rosa controlled Tucumcari's 3-point shooting but little else during a 65-18 romp Jan. 22 by the Lady Rattlers at the Snake Pit.

The Lady Lions made just two field goals in the first half while Tucumcari took leads of 23-3 in the first quarter and 46-11 at halftime.

Herrera led the Lady Rattlers with 20 points, with Shipley adding 17 and Jones 12.

With Lady Lion defenders concentrating on the perimeter, Tucumcari made just two 3-pointers during the game, four below its average.

"They kind of took that away from us," Hittson said. "Then we went inside. It was pick your poison, I guess."

The Lady Rattlers scored many points off turnovers.

"I thought our press really worked well in the first half," Hittson said. "We've been working on that and our man-to-man defense, as well. I honestly believe to get where we want to get (at the state tournament), we're going to have to play a good, hard, man defense."