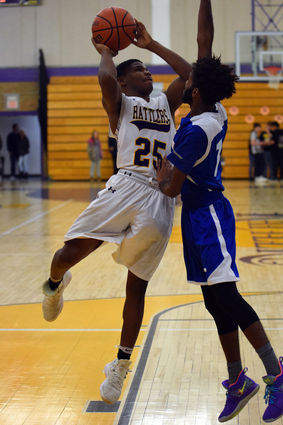 The Tucumcari boys basketball team could cite several reasons for its 58-56 Homecoming loss in the last minute Friday to Bosque, but an old bugaboo - poor free-throw shooting - proved decisive again.

Tucumcari coach John Span also lamented his team's decision-making down the stretch but clearly was frustrated with the ongoing free-throw troubles.

"The bad thing about is we shoot free throws all the time (in practice)," he said. "We shot over 100 free throws on Wednesday. We shoot a lot in practice. Hopefully, we can figure it out."

Bosque junior point guard Elijah Davidson received much attention because of his 6-foot-4 frame and game-high 25 points that included three dunks. But it was Dante Boeglin who turned out to be the hero for the Bobcats. He swished two 3-point shots in the final 20 seconds to give his team the lead.

"He hit some big shots," Span said. "Those were huge."

"He struggled for most of the game but came up big," Bosque coach Clifton Davidson said. "He's usually a spot-on 3-point shooter - about 45 percent on the season - but he struggled a bit with his confidence in this game. We had to set him down, let him compose himself and recognize he can make these big shots for us."

Thanks in part to early 3-point shooting by Chavez, Tucumcari grabbed a 16-8 lead in the first quarter. Bosque rallied to tie it at 30 by halftime, partly because several Rattlers fell into foul trouble.

Tucumcari surged to a 50-45 lead halfway through the final period. Jaxon Arguello gave the Rattlers a 54-52 advantage with a strong inside basket with 1:32 left.

Span said one missed opportunity was when his team missed a 3-point shot instead of going for an inside shot with several Bosque players in foul trouble.

"We shot a three we didn't need, and that was big," Span said.

Boeglin buried a 3-point shot with 20 seconds left to give his team a brief 55-54 edge. Lampkin was fouled seconds later and made both free throws to give the Rattlers a 56-55 edge.

Boeglin swished another 3-pointer for a 58-56 advantage. With time nearly expired, Chavez tried a shot near the top of the key, but it bounced hard off the glass and never hit the rim. Span said Arguello was open in the corner for a 3-point attempt but never got the ball.

"He didn't think he had enough time, and he didn't see him," Span said of Chavez's decision to shoot instead of passing to Arguello.

Despite the loss, Span saw reason for optimism as district play approaches in February.

"I feel like if we can bring this energy to district, we'll be all right," he said. "If we can bring it together and play for four quarters, we'll compete in district. We have to win it; with our record, we have to."

Santa Rosa put on a basketball clinic in the first half, roaring to a 40-point lead at one point during a 70-38 victory Jan. 22 at the Snake Pit.

The Lions, 12-3 and ranked No. 2 in Class 2A, missed hardly any shots and stifled Tucumcari's offense during the first half, taking a 51-10 lead at one point.

"Once our guys start making shots, they really turn it on on defense. Our offense makes our defense go," Lions coach Frank Ortiz said.

Span professed grudging admiration with how well Santa Rosa played in the first half.

"It was a butt-whipping, but we didn't quit," Span said. "They showed you how to run a break, run plays, how to hit shots. On the transition breaks, they were beating us bad and getting layups. That's just hustle; I told the kids, 'You've got to hustle.'

"It's basically what Pecos did to us last week," he added. "That's going to be one hell of a district, with Pecos, Santa Rosa and Texico. You got the top three teams in the state there."

Span tried to pack in the defense to counter Santa Rosa's inside game, but the Lions converted eight 3-point shots.

"You pick your poison," Span said. "It's nice (for Santa Rosa) to have that luxury."

The Rattlers outscored the Lions 26-19 in the second half.

"Our second half wasn't very good, but luckily we were ahead, so we didn't have to worry much about it," Ortiz said.