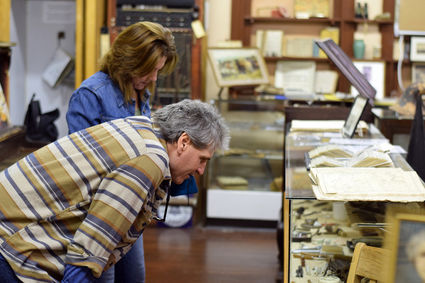 Joe and Heidi Lindvay of Amarillo look at beauty-shop equipment Saturday in one of the display cases of the Tucumcari Historical Museum.

The Tucumcari Historical Museum will mark the 50th anniversary of its grand opening with four events that organizers hope will spark children's interest in local history and bring back memories to those who were there when the museum opened.

Cindy Lathrom, a member of the museum's board of directors, and Joy Young, a former board member and longtime volunteer, last week sat down in the museum's Herman H. Moncus Memorial Annex to talk about the museum's history, its sprawling collections, its upcoming events and its future.

The museum at 416 S. Adams St. will host the wide-ranging anniversary events in April, July, August and on the actual 50th-anniversary date in June.

n April 13, "The Early Days." This program will focus on the area's history before English-speaking white settlers arrived. Children's activities and historic presentations will include fossils, petroglyphs, Native Americans and Spanish colonials.

n June 1, "Western Days," the date of the museum's 50th anniversary of its grand opening will include chuckwagon meals, western re-enactors, old-time music and children's activities.

n July 20, "Neon and Travelers Day." Much of the focus will be on Tucumcari's Route 66 businesses past and present, including the Blue Swallow Motel and Motel Safari that will mark their 80th and 60th year in business respectively. That event also will feature drawings for tourists, children's games, food and music.

n Aug. 10, "Honoring Military History." The event will honor veterans and military history from the time of New Mexico's statehood, including Fort Bascom, World War II gliders, Conchas Dam and the Bataan Death March that affected hundreds of U.S. soldiers from the state.

The museum is open from 9 a.m. to 3 p.m. Tuesday through Saturday.

History of a museum

Much of the Tucumcari Historical Museum's artifacts are housed in the three-story Tucumcari Central School, built in 1903. Except for a condemned building at Second and Main streets in downtown, it remains the oldest building in town.

The Tucumcari school district used the building sporadically for its original purpose - education - until it closed in 1965.

Central School also found use as a soup kitchen during the Great Depression, an office for the U.S. Army Corps of Engineers in 1935, a hospital from 1936 to 1937 and even a glider school during World War II.

Herman Moncus became the driving force behind the founding the Tucumcari Historical Museum. A Texas native, his family moved to a homestead in eastern New Mexico when he was an infant. According to a 1969 article in the Amarillo Globe-News, he collected arrowheads and other Native American artifacts from the surrounding mesas.

He started work at the Elk Drug Store along a fledgling U.S. 66 in Tucumcari during the 1920s, and then bought the business during the 1940s. He used the store to warehouse his rapidly growing collection of relics.

About 40 people founded the Tucumcari Historical Research Institute in 1958 and looked for 10 years to find a suitable site for a museum. It finally found one with the closed Central School, and the school district sold it to the organization for $1 in 1967. Moncus finally had found a place to show his artifacts, though those in those in the Quay County region and even Texas had donated many more.

More than 1,000 people attended a preview opening of the museum June 2, 1968, according to an article in the Tucumcari Daily News. During the grand opening June 1, 1969, about 350 people signed the museum's guest register. Moncus presided over the facility's ribbon-cutting ceremony, with the ribbon being barbed wire wrapped around the front door.

Even with high local interest, the museum operated on a shoestring. On its grand opening, the Tucumcari Historical Research Institute held just $500 left in its treasury, and it required $600 a month to keep the museum open. The city of Tucumcari eventually assumed ownership of the building and grounds.

The Tucumcari Historical Research Institute still counts about 60 members (the cost for membership is $25 a year for a family).

Lathrom said the board of directors also accepts new donations of artifacts almost monthly. For all of its thousands of items on display, she said even more photographs and historical documents are stuffed into drawers because there is no room to show them.

Lathrom also keeps a transcript of a Moncus interview from October 1969 telling what was in the Tucumcari Historical Museum at that time. In one section, he describes flagstone that came from a World War II POW camp near Fort Sumner.

She said Moncus also tells of several items displayed outside that vanished over the years. Lathrom surmises some of the uncovered 19th-century wagons or structures collapsed because of exposure to weather and were thrown out. But Moncus also mentions grave markers at the museum, and she hasn't figured out what happened to those.

Lathrom said about 2,500 visitors went through the museum last year. The record was 3,500 in 2009, when the museum had longer hours.

She said the Tucumcari Historical Museum would love to have more visitors, especially school tours and the younger visitors they bring.

The museum's sprawling collection includes a 1905 telephone switchboard, bootleg liquor stills, a 1926 firetruck, a caboose, roulette wheel, old cowboy boots, military equipment from Fort Bascom and many old photographs. That doesn't even account for the annex, which houses local and traveling exhibits.

Lathrom said adult visitors often comment favorably on the museum's cowboy- and military-themed rooms, along with a basement furnished like a century-old home.

She said many visiting schoolchildren say they like the F-100 military jet parked near the museum. Others like gazing at the stuffed birds in the annex. Other children like chasing the native lizards and horned toads around the grounds during the spring and summer.

Lathrom said she eventually wants to add explanatory signs to many of the artifacts and displays at the museum.

"The thing that bothers me is all of our displays don't tell a story," she said. "We want more interest, especially with the young generation, because if we don't encourage the youth to know it's their museum and take care of it, it eventually will be gone."