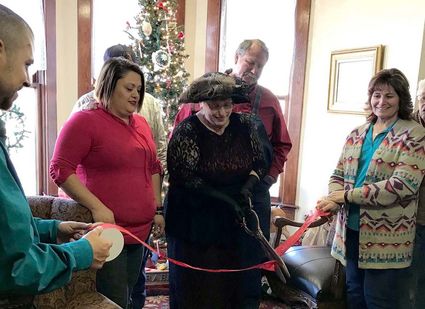 Debra Whittington, center, at the ribbon cutting for her Dollhouse bed and breakfast in 2017.

Those who knew Debra Whittington said it seemed appropriate a reception after her funeral Thursday was held at her Dollhouse Bed and Breakfast in Tucumcari.

Whittington, a local author and longtime columnist for the Quay County Sun, died Feb. 11 after an extended illness. She was 61.

A few years ago, she and Mark bought a 1908 Victorian house near downtown Tucumcari, restored it and renamed it the Dollhouse Bed and Breakfast in 2017.

Todd Smith, a member of the First Baptist Church in Tucumcari where she attended who knew Debra Whittington for years, said the Dollhouse culminated her dream that persisted from early adulthood.

"When Mark brought her to town and got married, they'd drive by this place and she'd say, 'I've got to have this place,'" Misty Smith, Todd's wife, said.

Debra befriended the longtime owner of the house, Gertrude Montgomery, and played cards with her. Montgomery eventually died, and the Whittingtons acquired the property at 401 S. First St.

"She wanted this house forever," Todd Smith said. "It needed a lot of work. But she got in here, and she was very happy. It was a dream come true. She kinda went back to her childhood hosting tea parties here."

"This little 'doll house' was her dream world," agreed James Foust, a regional director for the Gideons in New Mexico, which Debra was a member of its auxiliary.

Whittington wrote two local history books, "In the Shadow of the Mountain: Living in Tucumcari" and "2 for $6 on Route 66," the latter which details Tucumcari's history as a town for overnight travelers and her experiences in helping her husband run the Pony Soldier Motel from 1976 to 2004.

"She loved to do research," she said. "People would contact her about a family member who lived in Tucumcari in the 1920s. She would pore through the archives and old newspapers and send the information.

"She was an avid reader, and she would have two to three books going at a time," she added. "And she could recall dates. You'd mention something, and she would tell us all sort of facts about it."

Debra Whittington also wrote a devotional book, "Let's Go to the Mountain," and her "Church Lady" religion columns in the Quay County Sun until just a few years ago.

Joycelyn said one of Debra's regrets was she didn't earn a bachelor's degree. She attended three semesters at Eastern New Mexico University in Portales before dropping out so she could marry Mark.

"It was always her dream to go back and finish, but it didn't work out," she said.

John Hinze, pastor of the First Baptist Church, said the congregation was going to miss Debra because of her caring attitude.

"She loved to teach Sunday school and, of course, she loved to write," Hinze said. "I can't tell you how much of a blessing they'd been to this church."

Because the Whittingtons didn't have children of their own, Hinze said they often became "adoptive grandparents" to other children in the church.

Tracey Cordova said her 6-year-old daughter, out of the blue, during church proclaimed the Whittingtons were going to be her "Grams and Pops" - a role they embraced.

Todd Smith said Debra also loving fishing and being in the outdoors.

"That was one of the things we got to do with her, go to Coyote Creek," he said. "We found a fishing hole there, and she had a ball."

Linda Gunkel said one of her most indelible memories of Tucumcari involved the Whittingtons.

"One day, I was driving down Tucumcari Boulevard," she recalled, "and there was this couple walking down the street, holding hands. It was Mark and Debbie. There a lot of good things to see here, but that was the best.

"It was really evident to me she loved him and he loved her because they did these marvelous things for each other," she added.