Interest up in Tucumcari baseball 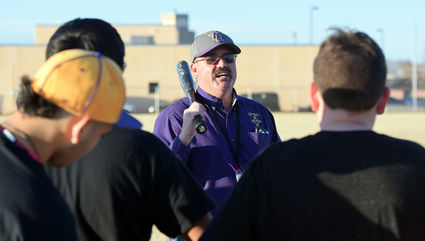 Tucumcari baseball coach Dwayne Roberts talks to his players late in a practice session Thursday. The Rattlers' opening day will be at 11 a.m. Saturday with a doubleheader against West Las Vegas.

If the Tucumcari's high-school baseball team struggles this year, it won't be because of a lack of players.

In coach Dwayne Roberts' third year, he's seen the number of players on his Rattlers squad jump from the low 20s to nearly 50 this year. A berth to the Class 3A state quarterfinals last season apparently boosts interest.

In Roberts' first year, the Rattlers were eliminated in the first round of the playoffs. Last year, with just one senior on a 9-11 club, they made it to the second round before being eliminated by Estancia.

He thinks the sky's the limit if his young players, with just five seniors, put enough work into improving their games.

"We're making strides," he said after practice Thursday. "We've got to get the kids to buy in and put forth the effort."

Tucumcari's season-opener will be at home Saturday, weather permitting, with a doubleheader against West Las Vegas. The first game is slated for 11 a.m., with the second penciled in for 1 p.m.

Taking the mound in the first game will be lefty Ryan Birch, with right-hander Alijah Jimenez pitching in the second.

A lack of pitching depth remains a concern for Roberts. National high-school rules have pitchers on a strict pitch count of 120. If a pitcher reaches that during a start, he must not pitch for four days.

"The main thing we have to worry about is having enough pitchers," Roberts said. "Most of our games are on Tuesday, so that means they can't pitch on Saturday (if the pitch count is reached). We've got some young guys who are going to have to step up, pitching-wise."

When asked about his team's strengths, Robert said: "Our hitting is good, really good. We can hit with anybody and we can score runs with anybody. We also got some great defensive players. Our infield will be as strong as anybody's."