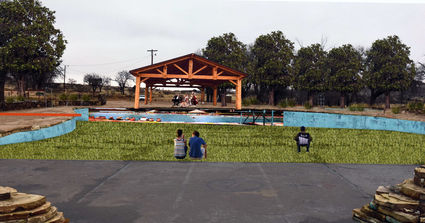 Among the top ideas presented to the Tucumcari City Commission on Thursday evening were artist's renderings of the old Route 66 park being converted into several uses - a shooting-sports area, nonmotorized trails, a children's adventure area, a walking trail, an ATV or motorcycle area, an area for drone-flying or paintball activities, overflow parking and a community space in the long-defunct swimming pool that can be used for concerts, movie screenings or other gatherings.

Attila Bality, an outdoor recreation planner for the National Park Service who has shepherded planning sessions for Five Mile Park for the last 18 months, said he hopes to present a final draft of the park plan to the Tucumcari city commission by June or July, with adoption by the city in late summer.

Bality on Thursday evening presented a progress report on Five Mile Park to the city commission.

The Civilian Conservation Corps built Five Mile Park, also known as Metropolitan Park, about 1940. Its swimming pool was considered the largest in the Southwest. Five Mile Park eventually fell into ruin, although the establishment there of an 18-hole disc-golf course a few years ago reignited interest in the site.

Bality said repairing and reopening the swimming pool is "not feasible" - hence the proposal to partly fill the pool, cover the fill with artificial turf and convert it into a community-gathering area. Nearby areas also would have pavilions and picnic areas.

Because Five Mile Park remains on the National Register of Historic Places, the proposal includes interpretive panels about its history and structures.

"We still want to keep the memories alive," Bality said.

In the draft's Adventure Trails section, it proposes areas of the park for mountain biking, hiking and even a cross-country course for high-school meets.

Envisioning the defunct Shell Truck Plaza on the city's west side as a trailhead, Bality said he would like a trail from there to the park. Gaining easements from the railroad or the Arch Hurley canal system for the trail likely will prove difficult but not impossible, Bality said.

"We need to keep this conversation alive," he said of possibly using a canal trail.

Bality identified several possible funding sources for the park's revitalization, including sponsorships and grants from AARP and other organizations.

Bality said "fixing up the park is easy; getting people there is the challenge."

He said the city would need to organize regular programming at Five Mile Park so residents and tourists use it regularly. He said a bicycle trail built in Gallup had grown fallow because the city failed to organize events around it.

Because of the city's tight budget, Lusk questioned whether he would have enough staff to create programs for the park.

"My biggest concern is how we're going to pay for it," he said. "I'm seriously concerned about this great revitalization and having the programming to keep it alive."

Bality said the redevelopment of Five Mile Park could be done piecemeal over a period of years to keep from overwhelming city resources.

In front of city commissioners later Thursday, Bality said the Five Mile Park renovations would make it more appealing to residents and could attract visitors, such as cross-country athletes for regional competition and other activities.

Such attractions, he said, could help achieve lodgers' tax goals of "putting heads in beds."

In addition, he said, the improvements are likely to make the Tucumcari area more attractive to businesses that seek locations for expansion or relocation.

Bality said the forthcoming draft master plan would specify what work could be completed in one to three years and what is expected in three to five years.

Commissioner Ralph Moya asked about grant funding and security for the park.

Bality said the park's master plan would be instrumental in seeking grant funds for the projects. Security, including gates and fences, he said are part of the plan.

"Vandals strike when there are no eyes on the park," Bality said. "If people participate and use it, there will be less vandalism."