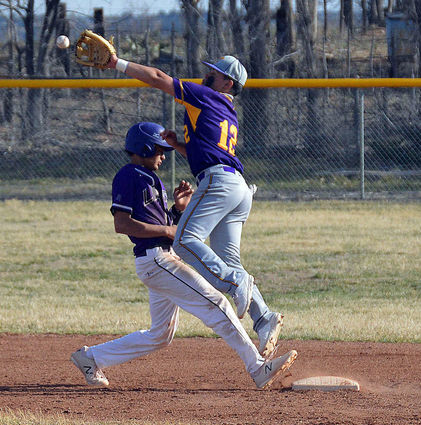 Tucumcari second baseman Andrew Casteel tries to corral a throw in an effort to tag out a Santa Rosa base runner Saturday during a game at Santa Rosa.

The Tucumcari baseball team's offense continued to be low gear during an 8-1 loss at rival Santa Rosa on March 26.

The Rattlers, who fell to 1-5, have scored just one run in four of its losses and two runs in another loss.

Against Santa Rosa, Tucumcari left nine runners on base. However, Tucumcari coach Dwayne Roberts saw hopeful signs during the loss to the Lions.

"This was a good game, but the score may not reflect it," he said. "The players even felt after the game that it was some of our best ball of the season."

Rattlers starter Alijah Jimenez, who pitched five innings and allowed five earned runs, took the loss for the Rattlers and scored his team's only run. Ryan Birch pitched one inning of relief when Jimenez reached his pitch-count limit.

Santa Rosa improved to 3-2. Darren Chavez earned the win for the Lions.

Logan dropped a doubleheader by 26-10 and 22-10 scores during a windy day Friday at district opponent Melrose.

"The wind was blowing out, and we struggled to catch fly balls," Logan coach Kyle Griffiths said. "We didn't make enough plays in the field to keep them from scoring."

Logan's Chase Hittson went 2-for-2 with three RBI during the first game. Park Strong also drove in three runs. A parade of four Logan pitchers walked 14 during the game.

In the second game, Dante Sanchez, who also was the starting pitcher, went 4-for-4 with two RBI. Wyatt Wright and Kyle Hamilton also drove in two runs.

On March 25, Logan earned its first win of the year with a 13-9 decision over visiting Elida.

Kyle Knight, who went 3-for-3 with a double, a triple and five RBI, led the Longhorns. Sanchez also went 3-for-4, including a triple, with an RBI.

Logan scored seven runs in the first inning and led 10-5 after three.

Grant Bollinger started the game for Logan, allowing just one earned run and striking out four in 3 1/3 innings. Strong finished the game on the mound for the Longhorns.

The Bronchos issued 15 walks and hit six batters during a 22-1 loss in the first game. Bronchos pitchers had the same problem in the second game during a 23-2 loss, issuing 17 walks and three hit batters.