New additions on way at Rawhide 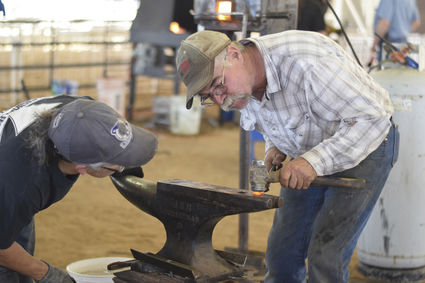 The fourth edition of Tucumcari Rawhide Days this weekend has a bunch of new additions - including admission fees for individuals or vehicles that have sparked a lot of talk among locals.

Tucumcari's tribute to the 1960s television western "Rawhide" will include a $5 fee for each vehicle coming from Camino del Coronado to park at the Quay County Fairgrounds. For those who park elsewhere and walk to the festival through the gate near the Tucumcari Convention Center, admission will be $1 apiece.

Rawhide Days chairwoman TJ Riddle said the idea behind admission fees for parking or walk-ups is generate revenue and make everything else during the festival free, except for food and headlining entertainment.

"The list of everything that is free is endless," she said. "We decided we needed to charge a parking fee than charge for every little thing. Five dollars a carload is very nominal to have a full day at the fairgrounds. We didn't feel like having every little thing dollar you to death. We want to get everyone inside to see what's going on and see what fun it is."

Riddle said parking will be restricted to the west side of the fairgrounds for another reason.

"With all of the chuck wagon campfire cooking and food vendors, we can't afford to have traffic and dirt back there," she said of the festival area's east side.

Among the new offerings at Rawhide Days:

No family members or relatives of the original "Rawhide" cast will attend this year's event. Chystie Wooley, daughter of Sheb, is recuperating from foot surgery, Riddle said. Shirley Brinegar, wife of the late "Rawhide" co-star, and her son, Mark, recently canceled their appearance in Tucumcari because of her health problems.

"We tried really hard to get the Eastwood kids to come, but that didn't come to fruition, either," Riddle said.

The festival runs from noon to midnight Friday and from 9 a.m. to midnight Saturday. One of the big events is the parade of Texas longhorn cattle at 9 a.m. Saturday, which begins at 113 N. Lake St., then west to the fairgrounds on Route 66. The festival area will contain its usual western-themed events such as trick roping, gunfights, horseshoe pitching, mechanical bulls, country music and a ranch-hand rodeo.

Among the music acts performing at the nearby convention center are Limited Edition, Steven Blea, Coby Carter Band, Lendy Borden and Bakersfield Twang, and Will Banister and the Modern Day Ramblers.

Riddle said most events are scheduled with short breaks so attendees can see them without missing anything. A full schedule can be found at tucumcarirawhidedays.com. Anyone with questions also can contact Riddle at 575-403-7274.