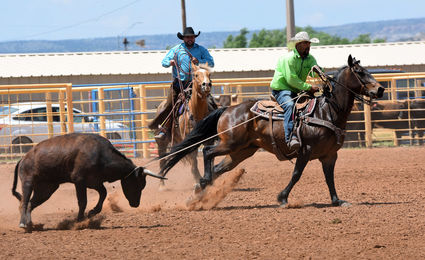 Organizers of Tucumcari Rawhide Days knew crowds had been rollin', rollin', rollin' through the Quay County Fairgrounds during three previous editions of the festival. Now they have a figure for the total number of people who attended this year's festival Friday and Saturday - 3,200.

The festival that pays tribute to the early 1960s Clint Eastwood television western shot near Tucumcari has a more solid number on the crowds it draws instead of "guess-timates" of previous years, as festival chairwoman TJ Riddle put it, because it implemented an entrance fee of $5 per vehicle or $1 per person.

Riddle said little grumbling came from festival-goers about the fees, which also provided a source of revenue in exchange for more free attractions.

"People would say, 'Oh, gosh, this is so minimal,'" Riddle said Sunday. "There were a lot of comments about this being no big deal."

Riddle said she wouldn't have the festival's final revenue figures until later in the week.

"We were very blessed," she said.'

"Rawhide" remains the hook for the festival, but Alan Daugherty said during the opening ceremony Friday morning at the Tucumcari Historical Museum the event also serves as "a celebration of the western heritage ingrained in our region."

That western heritage was on full display during the festival's popular Ranch Hand Rodeo, which drew hundreds of spectators to the rodeo arena to see 20 teams of cowboys and cowgirls test their skills in competitions – such as trailer loading, doctoring, steer dressing and stray gathering – that proved to be more practical on the ranch than traditional rodeo events.

Riddle said organizers capped the number of teams in the rodeo at 20 to keep the competition from stretching beyond its usual four to five hours Saturday afternoon.

One new offering that was a "big hit," Riddle said, was the petting zoo by Runyan Ranches near Artesia. The zoo brought mostly farm animals, but a few exotic beasts such a camel, a kangaroo, a large tortoise and a rodentlike capybara also made the trip to Quay County.

"Many families went back to the petting zoo two to three times," Riddle said.

The New Mexico Gunfighters Association, based in Albuquerque, put on Old West skits with slapstick, irreverent humor and nods to its audience. "Molly, I'll tag you on Facebook later," said crusty cowboy Chester Moon, who actually is Tommy Sims, president of the acting troupe.

"We used two bleachers for them," Riddle said of the troupe. "They were packed, and they told us they probably should have used two more bleachers."

Riddle said sales by vendors ranged from good to great. Two food booths that worked the 2018 version of Rawhide echoed that assessment. Diane Becerra, owner of Diane's Flat Top Grill, said sales were "about the same" as the previous year, and she praised organizers for removing a sluggish Sunday from the festival schedule. Tim Foster, co-owner of Be Blessed Catering, said he saw better sales Friday than in the previous year and had sold out of food by Saturday afternoon.

"Wild Horse" Harry Toulimous of Corrales gave horse-drawn wagon demonstrations. Using a team of three Belgian horses and his verbal commands, they deftly backed a large wagon into a carport on the fairgrounds with only a few feet to clearance on each side. It's not as easy as it looked, he said.

"The problem is you got four different minds working on one problem," he summarized the complexity of their feat.

A few other skills developed on the ranch evolved into forms of entertainment. Brice Chapman of Lubbock, Texas, along with his 13-year-old daughter Grace, showed a variety of trick-roping feats, including using 60 feet of rope to spin a loop around himself while atop his horse.

Maureen McGinn of Circle MTM Chuckwagon in Roswell brought her circa-1915 wagon and outdoor cooking skills to the festival. She, along with several other chuck wagon re-enactors, dished out bowls of meaty bean stew, peach cobbler and freshly made biscuits - all made over a campfire.

One new event was the Kids Cowboys Games, where a half-dozen children raced with a toy stickhorse around road cones like a barrel racer. The fastest way around the obstacles would have been a full sprint. But one girl felt compelled to skip around them in the same giddy-up rhythm as a horse. Harvey Jeppsen of Logan, dressed in full cowboy regalia, slapped his stickhorse with its reins while running in an effort for more speed.

Descendants of "Rawhide" co-stars Paul Brenigar and Sheb Wooley were unable to attend the festival this year because of health problems. But the TV show wasn't far from people's minds, as evidenced by 19-year-old Morgan Murray's painting of Clint Eastwood from "The Good, The Bad and The Ugly."

Country-music bands such as Limited Edition, Bakersfield Twang and the Modern Day Ramblers played to good-sized crowds, especially Saturday night, at the nearby Tucumcari Convention Center. But Randy Huston and Mike Moutoux, who performed acoustic sets at the fair barn, provided a more authentic side to western heritage. Both are real cowboys who happen to play music on the side.

Murray, who hails from Lubbock, was there to display her artwork in the fairgrounds' main exposition building. She decided to create the Eastwood portrait Friday for a silent auction Saturday so she could "buy more art supplies."

Not far from the Ranch Hand Rodeo, Mesalands Community College's rodeo team set up its mechanical bull to allow festivalgoers a chance to ride it. Sadie Bruhn, 12, of Logan took the challenge and rode the bull without a hint of falling off.

"It was fun," she said of the experience. "A little difficult."

Sadie then revealed she rode the mechanical bull last year. It wasn't her first rodeo.