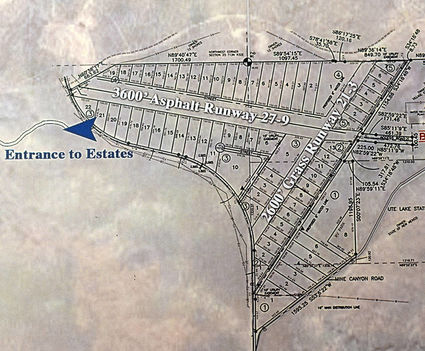 This map shows the proposed Air Park at Ute Lake subdivision near Logan that includes 59 residential lots and two runways for planes.

The Quay County Commission on Monday approved a preliminary plat of the proposed Air Park at Ute Lake subdivision near Logan that combines residential housing with individual airplane hangars and two runways.

The unanimous approval came with the stipulation that Chad Lydick, a Clovis engineer overseeing the project, submits a cultural properties protection plan for the 160-acre development east of 12 Shores Golf Course.

Sid Strebeck of Clovis, along with his son Layne, are developing the 59-unit development. Strebeck said in a phone interview last week each housing unit, complete with a hangar for private planes, will cost between $225,000 and $500,000 and be between 4,000 and 8,000 square feet in size.

With approval of the preliminary plat, Strebeck said construction can began within a week or so and that four lots already have sold. Using contractors primarily from Tucumcari, Logan and Clovis, he said he hopes to have the first homes finished by early September.

"We think we've got enough interest in this, we'll move along on this pretty fast," he said.

Sid Strebeck said the airpark subdivision was his son's idea. He said Layne uses a plane to check on cattle at his ranch near Logan and built a grass landing strip there. He also befriended about 20 people - many near the Dalhart, Texas, area - who flew planes and liked the convenience of Layne's airstrip.

"They told him, 'We need to build hangars here and a place to live,'" Sid Strebeck said. "He had a great idea, and I'm supporting him 100 percent on this."

The next-closest airpark subdivision is Edgewood, New Mexico, or Amarillo.

Strebeck said the proximity to Tucumcari Municipal Airport is a plus for Air Park at Ute Lake because it provides another runway option if weather conditions are bad near Logan.

He said the airport also allows owners of larger planes to land there, then take a car 15 to 20 minutes to the subdivision.

County commissioners had planned to decide on the preliminary plat during a May 28 meeting, but that was moved up because of scheduling conflicts.

In other action Monday:

n Commissioners adopted a $13.49 million preliminary budget for the 2020 fiscal year. Finance Director Cheryl Simpson said the budget includes a 3% wage increase for all employees. County Manager Richard Primrose said it appears expenses for the coming year rose sharply, but those expenditures - including $1.5 million for new firetrucks at rural departments - are covered by money that accumulated over several years. He said that county also received money from capital-outlay appropriations and community development block grants.

n The commission approved the $42,906 purchase of a command vehicle for the county fire marshal. Also, Fire Marshal Donald Adams will retire in mid-June and be succeeded by Lucas Bugg.

n The commission approved emergency management coordinator Daniel Zamora's resolution for an emergency plan promulgation, which he said is "a list of capabilities." He said the document hadn't been updated since 2009, and he hopes to update it every two years. Commissioners also approved Zamora's request to submit a $29,778 emergency management performance grant application to the state to cover half of his salary and benefits.