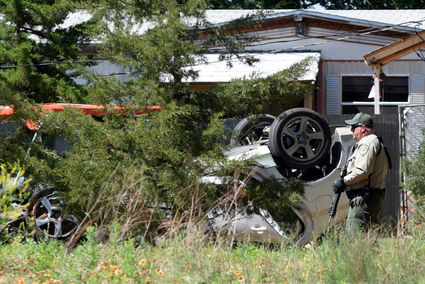 Quay County Sheriff Russell Shafer looks over a crashed car near the corner of Maple Avenue and Second Street in Tucumcari after a high-speed chase May 14 where one of the vehicle's occupants shot at officers after the crash.

Two suspects from Colorado remained in the county jail after they were accused last week of crashing a car in Tucumcari after a high-speed police chase and shooting at officers as they approached to give first aid. The duo surrendered to police af...