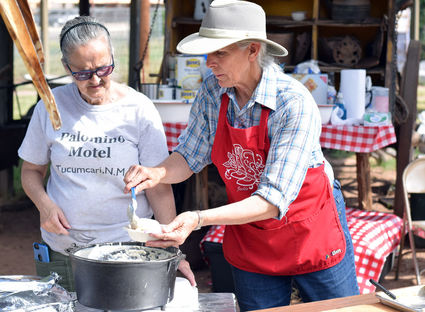 Vastly improved weather conditions made all the difference with attendance Saturday during the 50th anniversary of the Tucumcari Historical Museum.

Spitting rain and cold temperatures depressed attendance at the previous special event in mid-April. On Saturday, ample sunshine, gentle breezes and temperatures in the 80s led to bigger crowds.

More than 150 people went into the museum's main building's by mid-afternoon Saturday after it didn't reach 100 during the April event.

Dozens more milled about the complex's outdoor activities and exhibits. More than 150 servings of biscuits-and-gravy prepared at a chuck wagon were served for breakfast, and three pots each of cowboy stew and posole were served at lunchtime. More than 60 people young and old had participated in a rock-painting booth by noon Saturday.

Cindy Lathrom, a member of the museum's board of directors, said she was "thrilled" with the crowds.

"This was really great," she said. "We had a great turnout, and we had a lot of things for them to do. We had people coming in all day."

Memories were exchanged of the late Herman Moncus, who was instrumental in the museum's founding. In tribute of Moncus cutting barbed wire wrapped on museum's front doors 50 years ago, three longtime board members cut barbed wire at the complex's entrance Saturday morning.

Lucy Nials, a former teacher and author of a book about the history of St. Anne's Catholic Church in Tucumcari, gave a short speech about her memories of Moncus.

She said as a teenager, she grew to know Moncus at his Elk Drug Store in Tucumcari when she walked there after school and chatted with him as she waited for her father to pick her up from his ranch. Nials said she learned a lot from him about presenting history.

"You have to personalize it," she said about historical presentations. "He would put you in that situation."

She said she also learned the importance of proving facts on local history.

"Moncus was adamant about validating everything he talked about," she said. "With Moncus, I learned about history and learned what made it history."

Before her remarks, Nials recalled Moncus during the late 1950s erecting several tepees on the shoulders of Tucumcari Mountain and hiring a few Native Americans to tend to them. Moncus in turn would lead tours from Route 66 to the tepees.

Nials was asked what Moncus, who died in 1980, would think of the 50th anniversary event Saturday.

"He would love it," she said. "He loved people, and he loved visiting with people."

Nials said she also learned to preserve local history, as much of it becomes lost to fires, weather disasters and other misfortunes over the decades. Moncus also persuaded people to tell their stories, even those are reluctant to do so.

"Moncus didn't miss an opportunity," she said. "He saved it for all of us."

Dorothy Randals, who came to Tucumcari as a newlywed in 1950, said she learned a lot about the region's past when she ventured to Moncus' store to buy the first cattle vaccines to combat blackleg and brucellosis at her family's ranch near Montoya.

"We would spend half an afternoon there," she said, "hearing him explain what it was like to lose cattle (to those diseases)."

Danny Wallace, whose father Bill was on the museum's board for decades, smiled when asked about Moncus.

Wallace said when he was a teen, Moncus came to father's ranch southeast of town to check on a report of prehistoric elephant remains there. Moncus helped uncover the animal's tusks, skull and leg bones.

Wallace also recalled Moncus keeping dead snakes in glass jars filled with formaldehyde at his drugstore, including a particularly long specimen found on Tucumcari Mountain preserved in a glass tube.

Duane Moore, who also provided information Saturday about Quay County's 50 cemeteries as a volunteer for the Find-a-Grave website, said Moncus' nickname was "Corny" because of his jokes.

He and other area ranchers also went to Moncus' drugstore to acquire the latest cattle vaccines.

"They'd drink coffee and keep up with all the latest gossip on all the ranches," Moore said.

Museum volunteers filled the day with a variety of demonstrations, including corn grinding, arrowhead making, yarn spinning and ice-cream making. They also served dozens of cupcakes in mark the museum's birthday.

The event mostly ended by the late afternoon with a cowchip-throwing contest at the rear of the complex. Wallace had entered several times in the national contest in Beaver, Oklahoma, during the 1980s and finished third one year.

Volunteers had procured the cowchips - a polite term for dried-up pieces of cattle manure - from someone's Texas longhorn outside of town. throwing Several attempts resulted in the cowchip disintegrating before hitting the ground, to much laughter from those observing.

Wallace finished third Saturday. Randall Rush of Forrest turned out to be the winner of the men's division with a heave that soared nearly 100 feet. Sissy Young, one of the cooks at the chuck wagon, won the women's division. Each received a handmade trophy of a small cowchip attached to a board with baling wire.

The next special events at the museum are:

• July 20, "Neon and Travelers Day," with focus on Tucumcari's Route 66 businesses past and present.

• Aug. 10, "Honoring Military History," which will honor veterans and military history from the time of New Mexico's statehood.