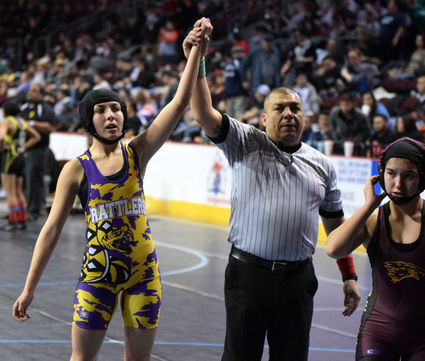 A referee raises the arm of Tucumcari's Aleayah Lucero after she defeated Belen's Cailean Romero in the 121-pound girls third-place match in a state tournament exhibition February at the Santa Ana Star Center in Rio Rancho. The New Mexico Activities Association is considering making girls wrestling an officially sanctioned sport at the high-school level.

The New Mexico Activities Association is poised to make girls wrestling an officially sanctioned sport, and Tucumcari's wrestling coach is all for it.

The association's commission voted for the proposal last month, and the NMAA's board of director...