Public invited to weigh in on Conchas Lodge 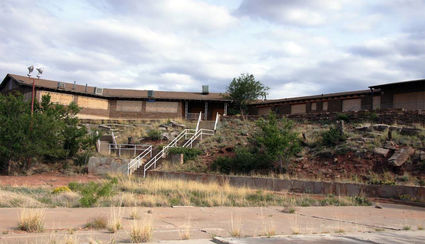 Conchas Lodge on Conchas Lake's south side has been closed at least since 2005, and the Army Corps of Engineers is seeking opinions on proposals for it that range from restoration to complete demolition.

The U.S. Army Corps of Engineers is looking for opinions on what to do with the long-closed Conchas Lodge on the south side of Conchas Lake. Three proposals would renovate and reopen all or part of the facility, and one would bulldoze it.

The corps on July 1 invited the public to participate in a public scoping, or submitting feedback, on the possible future of Conchas Lodge. According to the scoping document, Conchas Lodge was built in 1942 by the Civilian Conservation Corps and has been managed by the corps and New Mexico State Parks. It stated it closed in 2005 after a private concessionaire ran it.

"Currently unoccupied and boarded up, the building was found to be in marginal condition as has suffered deferred maintenance, acts of vandalism and biological infestation, in addition to having asbestos containing materials, lead-based paint and lead containing materials," the document stated.

• Option A: Rehabilitate the original lodge and lodging rooms, remove all the non-historic sections that include Fisherman's Wharf and east annex, open a full-service restaurant or catering kitchen and install a patio with native landscaping in the former pool area.

• Option C: Rehabilitate the original lodge hall for special-event use, remove the entire west wing but keep the low-wall remnants, remove all non-historic sections, keep the walls and ceiling of the former restaurant and add a patio in the former pool area.

• Option D: Demolish all existing structures and return the site to a natural area.

The corps stated Conchas Lodge is eligible for the National Register of Historic Places and must consult with the state's Historic Preservation Office before proceeding.

The document contained blueprints and artist's renderings of the preservation proposals.

Those who wish to comment on which option they favor should email the agency's Francisco Salazar at Francisco.J.Salazar[email protected] or write a letter to: Francisco Salazar, Operations Support Branch, 4101 Jefferson Plaza NE, Albuquerque, NM 87109-3435. The deadline to send comments is Aug. 2.

Quay County Commissioner Sue Dowell received word about the proposed options for Conchas Lodge via a corps email. Through social media, she has urged residents to email the corps and weigh in with their thoughts about the building.

"As far as choosing one of the options provided by the Corps, I would prefer Option A," Dowell stated in an email. "The historical preservation, keeping motel rooms, keeping a restaurant and such appeals to me most. The option I definitely do not want to see is Option D which would be demolition of everything."

No one answered the phone Friday at the corps' Albuquerque district office, and its voicemail box was full. An email to that office went unanswered.

However, Dowell said she called the corps office earlier in the week, and it clarified it would not hold a public meeting about Conchas Lodge. All public input must be sent by letter or email.

The corps did not state where the funding would come from for the first three preservation options. Remediation of asbestos and lead paint, however, typically is costly, and rehabbing the neglected property in general will involve many thousands of dollars.

Marshall Warren, a Conchas Lake businessman and resident whose parents ran a store on Conchas Lake's north side from 1970 until their retirement in 1983, said in a telephone interview he thought Conchas Lodge closed well before 2005. He speculated its closing occurred because of "management and money issues."

Warren signaled he didn't have much faith in the agency regarding the project. He said the state and corps were his parents' "two worst customers," and "to have the corps in charge of something like restoring the lodge scares me."

At the same time, Warren said he'd welcome the revival of Conchas Lodge. He said Conchas Lake doesn't have a restaurant or motel.

"It would be nice if we had facilities out here," he said.

Dowell, who has lived in the region for many years, said she holds fond memories of Conchas Lodge.

"I think anyone who visited south side Lodge would remember how beautiful it was," she stated in an email. "The historical architecture from the WPA era, the restaurant with the all glass wall overlooking the lake, and the swimming pool all were very nice. I would also bet if you asked people who ever went to the Lodge, they would tell you a favorite memory was the dances. There were dances weekly or so with live bands, and the dances were very well attended."

An email to San Miguel County's manager, asking whether the county had taken an stance on Conchas Lodge, went unanswered.

"It is very important that we do what we can to keep and to improve Conchas Lake," Dowell stated. "I know it is technically in San Miguel County, but it is a real asset to Quay County."