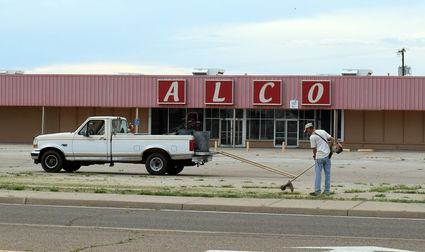 A maintenance worker trims weeds in the parking lot of the closed ALCO building in Tucumcari. Mesalands Community College's president announced the building would be renamed Tucumcari Business Hub and that two prospective manufacturers from Albuquerque recently toured the building with an eye toward renting it.

The closed ALCO building on Tucumcari's west side now will be called the Tucumcari Business Hub, and two prospective companies recently toured the facility with an eye at possibly renting space there, Mesalands Community College's president said during the board of trustees meeting July 16.

College President John Groesbeck said two Albuquerque companies recently looked at possibly renting the 40,000-square-foot former retail building. When asked after the meeting to elaborate about the two prospects, Groesbeck said they were in "light manufacturing of consumer goods."

Groesbeck said the Mesalands Community College Foundation, which owns the building, would offer a rent at 25 cents per square foot, with the leasee paying utility costs. According to Statista.com, typical square-foot rental rates for manufacturers in the U.S. are $5.70 to $6.50.

Groesbeck said he soon would meet with the state's Economic Development Department, which offers funding for business-incubator projects such as the one he has in mind for the ALCO building.

He said the foundation likely would have to cut overhead doors into the sides of the building to provide easier access for tenants.

Groesbeck said after the meeting the "ALCO" sign above the front entrance would be removed "once we have the money."

The store in Tucumcari was one of nearly 200 ALCO locations in 23 states that closed permanently by early 2015 after the retail chain filed for its second bankruptcy, then was liquidated.

In other business during the meeting:

• The board approved 13 purchase requisitions worth a total of about $667,000. They are: $176,514 to New Mexico Public School Insurance Authority for property and liability insurance; $24,000 to City of Tucumcari for water, sewer and garbage services; $50,000 to Mesalands Community College Foundation for property leases; $24,000 to New Mexico Gas Co. for natural gas service; $24,000 to Plateau Wireless for internet service; $28,000 to Ricoh Americas Corp. for copier leases and service; $80,000 to Xcel Energy for electricity; $81,000 to Tillman Enterprises in Clovis for Stampede Village lease; $73,441.62 to Cooperative Education Services for general obligation bond; $44,500 to Atkinson & Co. in Albuquerque for audit; $20,000 to Pearson Education for fall textbooks; $20,000 to Cengage Learning for fall textbooks; and $21,600 to Brady Industries of Las Vegas, New Mexico, for maintenance supplies.

Kennedy said the college also was calling students who had enrolled in the spring and summer but hadn't enrolled for fall in an effort to boost retention numbers.

• Natalie Gillard, vice president of academic affairs, said the college had submitted a "mini-application" and letter of intent to the New Mexico Board of Nursing for the college to eventually offer a registered-nurse training program. She said the college next was working on accreditation. Mesalands may offer an emergency medical services program, as well.

• Kimberly Hanna, director of public relations, gave an annual communications report that detailed stories about the college from as far away as Chicago and television reports from stations in Amarillo and Albuquerque. She said the college would add new billboards along the Interstate 40 corridor touting Mesalands that includes one tagline: "Where Learning Meets Doing."

• Several Mesalands students told the board about a new student ambassadors program that will offer orientation and campus tours to new students, plus ushering during graduation ceremonies and other guidance for existing students.

• Quay County Clerk Ellen White explained changes in upcoming elections due to consolidations of local and nonpartisan elections. White said because of the consolidation, Mesalands no longer would pay a fee for an election unless it sets a special election.

White said if a bond package for the college is soon to expire, it would behoove Mesalands to hold its next bond election early or late so it can avoid the cost of a special election. She said the Tucumcari school district recently held a special bond election that cost it $12,000.