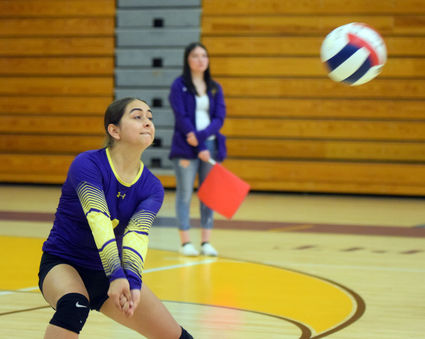 Tucumcari vs. Santa Rosa was expected to be a battle between two evenly-matched volleyball teams, and it didn't disappoint.

The match Saturday didn't prove decisively which team was better. Two of the games went beyond the usual 25 points, and only four points decided another. Santa Rosa coach Kevin Ortiz said he was pleased with his team's performance during critical times, especially with two freshmen and three more who hadn't played varsity.

"We played Tucumcari all summer, and we knew it definitely would be a scrappy game," Ortiz said. "It was a matter of composure. Our girls did a little better keeping their composure down to the wire. If we continue to do that, we should see good things in the future."

Coach Dana Benavidez agreed her Lady Rattlers have to do better during game-critical moments, especially with their passing.

"That's something we have to play through," she said. "We have to settle in and get the big play when it counts. I do believe we were playing to win. We were trying to attack the ball, and we did get a few calls that didn't go our way."

After splitting the first two games, the Lady Rattlers held a 27-26 lead in the third game but couldn't put it away. Tucumcari committed two hitting errors and one passing error to give that game to the Lady Lions.

In the fourth and deciding game, Tucumcari forged a 24-22 lead and was one point from winning it. The Lady Rattlers committed errors on three of the next four points to give the match to Santa Rosa.

Benavidez, noting her team looked stronger than a year ago, said "we're right there" in being a quality squad. She also said her players must be more mindful of using setter Reece Goldston.

"Sometimes we're just trying to dig instead of playing offensively where we get the ball to our setter without making her work so hard," she said.

"After that, we lost momentum ... stopped being aggressive. Each time we seemed to be getting it back, Des Moines would make a great play or we'd make a badly timed error."

Three Quay County teams, including the host in its season opener, will play in the Logan Lady Longhorn Volleyball Tournament on Thursday and Saturday.

After pool play, teams will be seeded for tournament play Saturday. The final is scheduled for 3:30 p.m. Saturday.