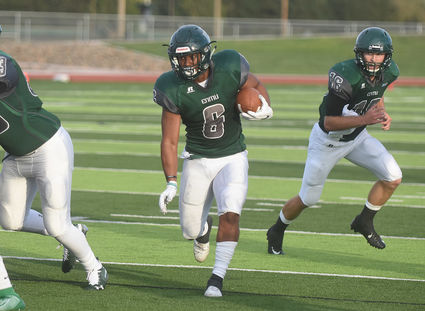 PORTALES - Johnny Smith scored the go-ahead touchdown with 4:51 to go, and Vicen'te Walker pulled down a red-zone interception to seal a nailbiter for Eastern New Mexico, 35-28 over Missouri S&T Saturday night at Greyhound Stadium in the season opener for both teams.

The host Greyhounds outgained the Miners 503-411 and dominated the possession time (36:06 to S&T's 23:54), but could never quite put away the Miners thanks to a big-play offense that only went to third down nine times on the night.

Neither team led by more than one score all evening, and the teams punted just three times on the night.

The Greyhounds did most of their damage with the misdirection offense, rushing for 472 yards on 77 carries, with Paul Terry leading the way. Terry, ENMU's leading rusher last year, carried 31 times for 189 yards and touchdowns of 9, 2, and 2 yards.

The Green and Silver threw the ball just six times on the night, with senior Wyatt Strand completing three of those tosses for 31 yards. He had a 15-yard scoring toss to Zachery Fields in the second quarter, but also notched an interception right after the Greyhounds received a gift possession at the Miner 25 as a punted ball that grazed a Miner was scooped up by senior Darryl Wiggins.

Brennan Simms completed 12 of 20 passes for 202 yards and a pair of touchdowns, a 61-yard toss to Josh Brown to knot things at 7-7 early and a 27-yard pass to Cameron Clemons early in the fourth to tie it at 28. He called his own number late in the first quarter on a fourth-down sneak from the 1 to make it 14-7.

Deshawn Jones added an 11-yard run for the Miners, who had 209 rushing yards on 31 carries.

The Greyhounds are on the road the next two weeks, facing Colorado Mesa 7 p.m. Saturday and opening the Lone Star Conference season Sept. 21 at Texas A&M-Commerce.